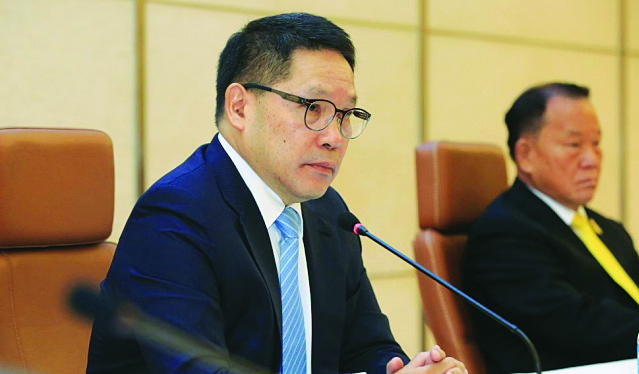 Finance Minister Uttama Savanayana has ordered state agencies to submit within three months precise action plans to improve the livelihoods of poor people while reducing economic inequality and accelerating public investment in order to cope with fluctuations in global economy.

At a meeting with Ministry of Finance officials, he said that all related departments must prepare the action plans in a way that contributes to government policies and is in accordance with the country’s 20-year strategic plan.

“Areas that we need to focus on include cashless payments, or an e-payment system, the promotion of community enterprises and local retailers, a reduction in socio-economic disparities, rural development amid a strengthening of the grassroots economy, improvements to social security via the welfare cards, and, especially, measures related to senior citizens and pregnant women and those with newborns,” he said.

The minister also insisted on increasing the country’s competitiveness and investment promotion via public-private partnerships (PPPs), especially in infrastructure and digital economy projects.

“Government agencies need to reform their digital capabilities, too,” he said. “We will focus on using Big Data to integrate information on the tax and finances of each citizen to streamline and optimise the tax collection process, ultimately hoping to provide a better service to the people,” he said.

“In the next three months all related agencies must have action plans ready to deploy. In the meantime, I will start visiting key departments to check on progress regularly.”