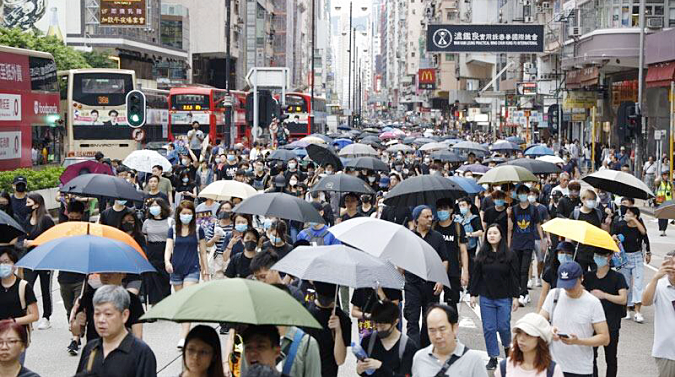 HONG KONG - Protesters ignored police warning and deviated from the approved routes during a procession in Mong Kok on Saturday, obstructing business and traffic busy commercial districts in Kowloon west.

Protesters, most of them wearing face masks and helmets, at one point blocked the Hung Hom Cross Harbor Tunnel during the illegal procession, causing massive traffic jams backing all the way to Hong Kong island.

Some protesters were seen wielding metal shields despite the absence of the police as they began their march in Mong Kok at 3 pm. Addition gears for protection against tear gas were seen being distributed among protesters.

Many shops and restaurants in the area have pulled down the shutters due to foreseeable troubles caused by protesters.

They spilled into main roads in Mong Kok and Tsim Sha Tsui districts around one and a half hours after the start of the procession, causing obstruction to traffic and businesses nearby.

At about 6:20 pm, in an unprecedented move, a group of protesters used different types of road barriers and roadblocks to block traffic of both directions of the Cross-Harbour Tunnel in Hung Hom.

The tunnel, the cheapest among the three cross-harbor tunnels, is the busiest road connection between Kowloon and Hong Kong Island across the sea.

An average of more than 100,000 vehicles cross the tunnel each day. An estimated 20 bus routes run through the tunnel moving many thousands of passengers between many areas on both sides of the harbor.

The blockade by protesters has stopped all traffic through the tunnel for around one hour.

Not only is a key cross harbor link blocked, a large part of Hong Kong’s busiest shopping and entertainment districts in Mong Kok and Tsim Sha Tsui were paralyzed by protesters occupying the main thoroughfare and various side streets.

Tsim Sha Tsui, in particular, is home of many luxury hotels, name brand boutiques and posh restaurants that are the main attractions to locals and tourists alike.

In a statement issued at 6:40 pm, the police appealed to protesters to stop obstruction roads road and the tunnel, and respect other people’s rights while expressing their views.

Some radical protesters ripped a national flag and threw it into the sea at the Star Ferry Pier in Tsim Sha Tsui, while others besieged the Tsim Sha Tsui Police Station.

They hurled bricks and other objects at the station, sprayed offensive words at the outer wall, damaged a vehicle and set a paper box on fire outside the station.

In a police briefing on Saturday morning about arrangements for the planned protests in the coming three days, Senior Superintendent (Operations) of Kowloon West Cheung Wai-wah stressed that the police have noted that there were online messages advocating the storming of police cordons.

He reiterated that the police has “zero tolerance” on violence and would take resolute actions against any violent act.