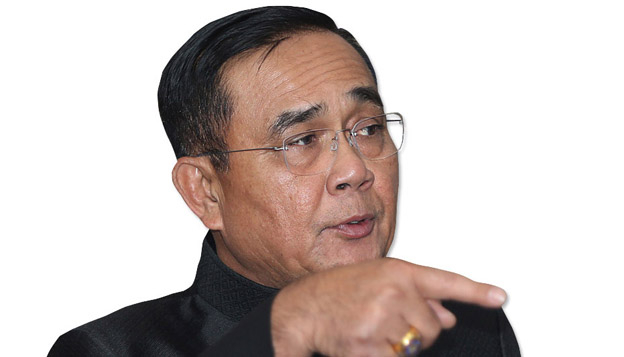 Prime Minister and Defence Minister General Prayut Chan-o-cha said Monday that police investigators have not yet ruled out any possible motive for the series of blasts in the capital on Friday and the planting of bombs in front of the Royal Thai Police HQ a day earlier.

Speaking to reporters while attending an event to mark the 132nd anniversary of the Chulachomklao Royal Military Academy, Prayut said police have arrested two suspects but they have yet to hunt down more than 10 other accomplices.

He said the public should be patient because police have yet to conduct further investigations. “Please be patient. If we pressure the officials, it will be hard for them to work,” Prayut said.

“These kinds of incidents can happen in any part of the world. There are many people with different opinions and I am not saying which group was behind the attacks.”

On Friday, police arrested two suspects in Chumphon while they were travelling on board a bus from Bangkok back to their homes in Narathiwat. Police sources said they were accused of planting bombs in front of the Royal Thai Police HQ on Thursday. The capital was hit by a series of blasts the following day. According to sources, police were focusing their investigations on whether the pair was taking revenge for the death of a suspected insurgent in detention.

Asked to comment on an observation of Army chief General Apirat Kongsompong that the latest blasts were similar to attacks in Bangkok in 2006 when no arrests were made, Prayut said the Army chief simply compared the two events.

“I don’t know whether any political group was behind the attacks or not. Please don’t rush to conclude anything now,” Prayut said.

When asked whether he thought the attacks were linked to the insurgency in the southern border provinces, Prayut said no possible motives have been ruled out yet.

Told by reporters that the mother of a suspect was demanding to know the whereabouts of her son, Prayut replied that it was normal for the mother to worry about her child but police would handle the suspects based on evidence.

Prayut said police have strong evidence against the suspects, including clothes they left behind and footage from security cameras.

Police sources said the suspects were seen near the front of the police headquarters and wearing different clothes.

Prayut condemned the attacks as evil.

“I regard the attacks as evil acts … especially doing these to Thailand now. We can’t yet say who did it but the perpetrators are very cruel and mean to cause turmoil to the country while the nation is moving forward under a democratic government,” Prayut said.

Prayut said it would be up to government agencies concerned whether to integrate all CCTV systems to the same control centre for better prevention of crimes.

He added that he would have police explain the case systematically, noting that this was the first time all agencies were integrating operations to solve the case.

“The intelligence work, the investigation and evidence testing have all been integrated,” Prayut said.

He said he would not set a deadline for police to solve the case because the number of 200,000 police personnel is considered inadequate when compared to a 70-million strong population.

He said he would like to call on the public to help police monitor any suspicious incidents, especially in tourist destination spots.

Asked whether the attacks were made to test his limit now that he is now supervising both the Police and the armed forces, Prayut said he did not think so as he has good ties with both Deputy Defence Minister General Chaichan Changmongkhol and with top police officers.

“I don’t think so,” Prayut replied when asked whether the motive was political and aimed to discredit the pre-poll promise of the Phalang Prachrat.

“When the party campaigned, I was the prime minister and chief of the National Council for Peace and Order and I did not get involved in the election campaigns … Don’t cross-link issues. The country is already suffering enough. Don’t you want to see the country peaceful?” Prayut told reporters.

When told that opponents suspected the blasts were linked to government, Prayut replied: “Look at a bigger picture. The government was holding an international meeting of Asean foreign minister and dialogue partner nations. Who would do that kind of things to discredit the kingdom’s credibility in the eyes of the international community?”

Prayut added that as director of the Internal Security Operations Command, he has asked the ISOC to work with other security agencies to prevent more untoward incidents and had also instructed the Anti-International Terrorism Centre to seek cooperation from neighbouring countries for information about possible terrorists crossing the borders to launch attacks in Thailand.