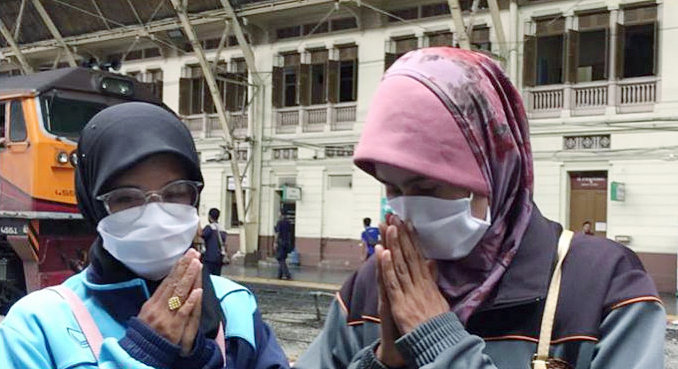 The families of two suspects arrested over the Bangkok bomb attacks sought permission to visit them after the two were transferred to the Royal Thai Police’s Forward Command in Yala on Monday morning.

The two were arrested on a bus at the Pathomphon checkpoint in Chumphon’s Muang district early on Friday after they were seen on security cameras allegedly planting homemade bombs in front of Royal Thai Police headquarters the day before. They were taken to the police training school under Provincial Police Bureau 9 before they were transferred to the Forward Command.

The mother of Lu-ai and relatives of both suspects came to the Royal Thai Police Forward Command at 10.37am to visit the two suspects, only to be told that the morning visiting hours ended at 10am. They were instructed to come back to visit them in the afternoon, starting at 2pm.

Lu-ai’s mother said she came to visit her son because she would like to find out whether he was safe and treated justly.

“If I see with my own eyes that he is safe, I’ll feel relieved,” she said.

“Whether he committed the crime is a matter of judicial process. But I have not met him for four days since his arrest. I am worried.”

“Lately, my son has been staying home all the time because he has just finished his research and will receive a degree soon. He told me he would make a visit to Bangkok to tour the city so I gave him permission.”

The mother said she would like to call on police not to harm her son.

“Please take care of my son and his friend. Whether he was right or wrong, please deal with him according to the law. Please don’t harm him. That’s all I ask,” the mother pleaded.