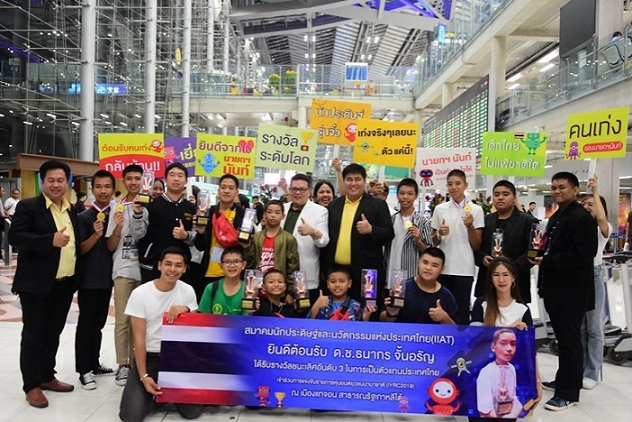 The Association of Thai Innovation and Invention Promotion on Monday congratulated Pathom 6 student Thanakorn Jan-aran of Bangkok’s Wat Pichaiyat School on his garbage-sorting robot that bagged the third-place award at the International Youth Robot Competition 2019 held in Daejeon, South Korea, from August 1 to 4.

Welcoming Thanakorn, his fellow Thai youth representatives and accompanying teachers at Suvarnabhumi International Airport, association president Phanawatnan Kaimart granted Thanakorno membership in the association, which would be valid throughout his youth.

He praised Thanakorn’s award-winning robot as a useful invention to tackle increasing garbage – an issue that "affects people and the environment". He also noted that this award on an international stage showed the world how talented Thai youths are, and called for a variety of robots "to help work by human to become more effective and precise".

Concerning the issue of garbage, he said people should be aware and participate in sorting garbage before disposal so recycleable items could be reused and various types of waste could be easily managed and properly disposed.