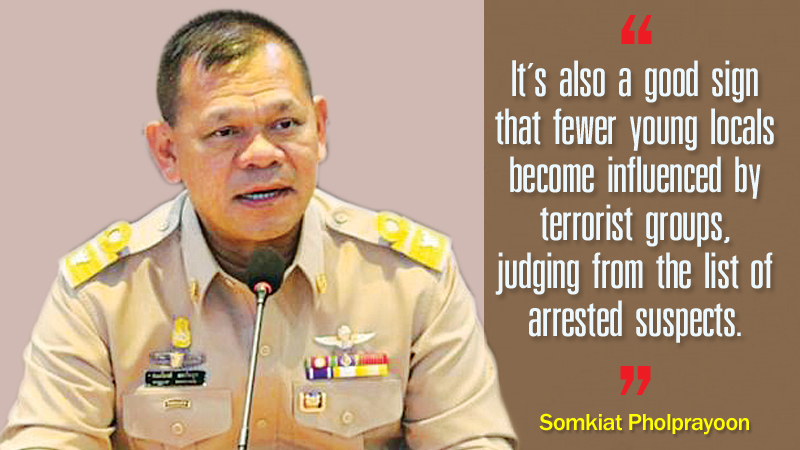 The centre’s secretary, Rear Admiral Somkiat Pholprayoon, said on Monday the unrest in the three border provinces that reignited in 2003 and has since resulted in 5,070 deaths and 10,500 injuries was finally showing positive signs, with fewer incidents occurring in recent years.

And fewer suspects arrested these days were “young troublemakers”, he said.

“We’re finally seeing positive results thanks to the peace negotiations led by General Udomchai Thammasarorat,” Somkiat said. “The negotiation teams visit troubled areas and discuss the problems with community leaders in a friendly atmosphere. Many communities are now open to government officials and willing to work with them to secure peace."

“It’s also a good sign that fewer young locals become influenced by terrorist groups, judging from the list of arrested suspects, most of whom belong to the older generation, who still have radical ideas.”

Somkiat said the centre planned to recast formerly conflict-prone areas in Pattani, Yala and Narathiwat as a “purple zone” where investment will be encouraged and tourist attractions promoted.

The Narathiwat border city of Sungai Kolok will be turned into a trading centre with the reopening of the Thailand-Malaysia rail route, he said.

Discussions between Prime Ministers Prayut Chan-o-cha and Mahathir Mohamad of Malaysia are underway to open trade between the countries as soon as possible.

Somkiat said his centre and the Secretariat of the Prime Minister were hosting a press tour of Songkhla, Pattani and Yala this week to show progress in the development campaign.

Prayut will meet the media travellers on Wednesday (August 7) in Yala.