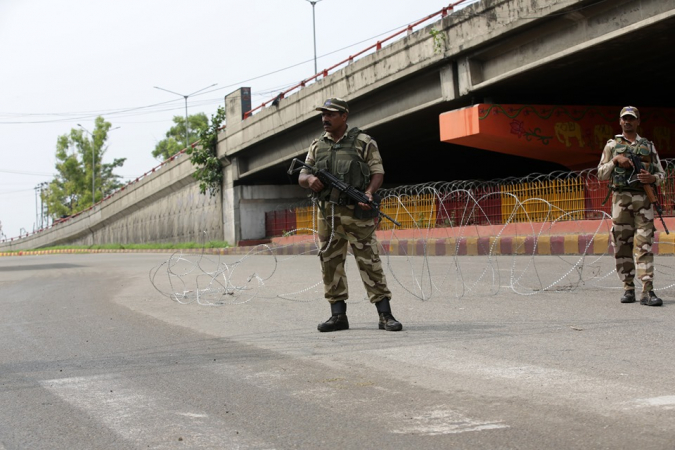 Indian paramilitary soldiers stand guard during a curfew in Jammu, the winter capital of Kashmir, India, on Monday.

The Indian government, in a dramatic move on Monday (August 5), revoked the special constitutional status of the state of Jammu and Kashmir through a presidential order.

Late on Sunday night, the Indian government had imposed curfew-like restrictions in the restive region, sending in tens of thousands of additional troops. Former chief ministers of the state, Omar Abdullah and Mehbooba Mufti, were placed under house arrest. Communications were blocked, with private mobile networks, internet services and telephone landlines cut, according to an AFP report. "There shall be no movement of public. All educational institutions shall also remain closed. There will be a complete bar on holding any kind of public meetings or rallies during the period of operation of this order. Identity cards of essential services officials will be treated as movement passes wherever required," read an Indian government order, but added: "there is no curfew in place". On Monday, the government revoked Article 370, which gave the state special status, and also bifurcated the territory into two states -- Jammu and Kashmir, and Ladakh. The drastic move would mean that people from the rest of India will now have the right to acquire property in the state and settle there permanently. Kashmiris fear this will lead to a demographic transformation of the region from majority Muslim to majority Hindu. Besides pouring in thousands of security forces, the Indian army and air force have also been placed on high alert. A statement issued by India’s Home Minister Amit Shah said that “Jammu and Kashmir will be a union territory with a legislature while Ladakh will be a union territory without legislature”. Amid uproar in Parliament, leader of the Opposition in the upper house, Ghulam Nabi Azad, said that the ruling party had "murdered the constitution today". The ruling party, the Bharatiya Janata Party, which has long opposed Article 370 had promised to revoke it in its 2019 election manifesto. A massive mandate has emboldened the party to act quickly on its pledge. Pakistan condemned India's decision to revoke the special status of its part of Kashmir as illegal, saying it would "exercise all possible options" to counter it. "India is playing a dangerous game which will have serious consequences for regional peace and stability," said Pakistan’s Foreign Minister Shah Mehmood Qureshi. Claimed entirely by both India and Pakistan, Kashmir has been at the centre of seven decades of conflict between the two neighbours.