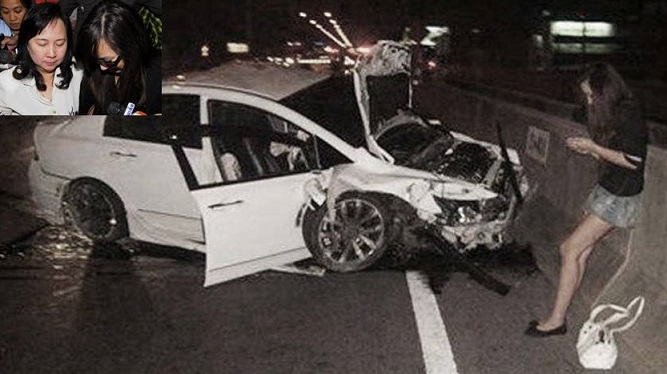 The families of nine people killed in a 2010 road accident in Bangkok involving an underage driver widely known by her nickname “Praewa” will finally receive monetary compensation.

Praewa's family would hand over the money to the Civil Court on Ratchadaphisek Road on Tuesday (August 6), a source at the court said on Monday.

After hearing from Praewa's mother on Monday afternoon that she had finally managed to raise the money for the compensation before the August 28 deadline, Justice Ministry deputy permanent secretary Tawatchai Thaikyo told reporters he was happy for the victims' relatives who could collect the payments from the court soon. He suggested that Praewa's mother should quickly inform lawyers of the damaged persons about the handing over of the compensation to the court so as avoid being found violating the payment deadline or being subjected to additional interest claims. Tawatchai thanked all sides for bringing a closure to this case.

Praewa, then a teenager too young to have a driver’s licence, crashed her borrowed car into the back of a public van operating on the Thammasat University-Victory Monument route on the elevated Din Daeng-Don Muang tollway in Bang Khen district on December 27, 2010. Nine people were killed and six injured.

Some of the survivors complained last month that they still hadn’t received any compensation from Praewa even though the Supreme Court on May 8 had ruled in a civil case that she, her parents and the owner of the car she was driving had to pay a combined Bt25 million plus interest to the injured and the next of kin of those killed. The Justice Ministry had said if the compensation weren't paid before the August 28 deadline, the Execution Department would auction off the assets of the convicts to ensure the victims' families received their dues within six months.

The Supreme Court dismissed her appeal after the 2014 Appeal Court sentenced Praewa to two years in jail, which was then suspended for four years. She was placed on probation for three years. She was also ordered to perform 144 hours of community service, which she completed in 2016. Praewa also was banned from driving until the age of 25. She turns 25 this year.