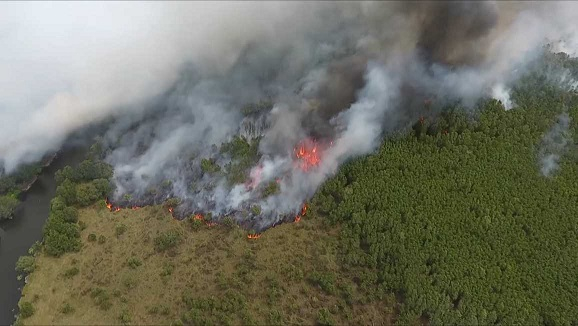 The fire also threatened to destroy nearby oil palms and rubber plantations as thick smoke filled the sky.

Days of peat forest fire had already caused damage in four districts last week before it was put out on Friday. Fourth Army Region chief Lt-General Pornsak Poonsawat, during his visit on Monday to inspect the fire-fighting mission, said he has dispatched more soldiers along with two helicopters to assist with the fire-fighting. He said a Ratchaburi private company had also sent in large pipes, which had proved useful in the Tham Luang cave rescue mission last year, to pump huge amounts of water into the peat forest.

The smoke reportedly caused respiratory difficulties to residents in nearby Hua Sai district. He said some military medical teams had been sent to provide aid to the affected people.

Tambon Mae Chao Yoohua in Chian Yai district also was affected by the fire, which destroyed power poles and wires resulting in an extensive blackout. Mayor Apichet Pradchu of Tambon Karaked in Chian Yai district said the Agricultural Land Reform Office should review and end its allocation of "Sor Por Kor" farming land plots around Khuan Khreng peat forest. He said the allocated plots did not have proper infrastructure (road and irrigation system) and were at risk of out of control forest fire.