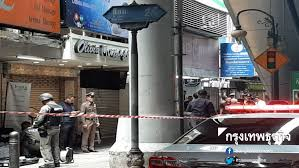 Another Narathiwat man has been arrested and charged with playing a role in the bomb attacks in Bangkok on Friday, a police source said.

The source from a police investigative team said the suspect was arrested just as he was about to cross into Malaysia at the Sungai Kolok border checkpoint. The source identified the suspect only as Hung.

The source said the suspect’s responsibility was to keep the homemade bombs, which were smuggled across the border from Malaysia, in his rented room in Bangkok for the bombers to plant at various spots.

The source said police believe the bombers, who were divided into cells that worked separately from one another, went to Bangkok with the smuggled bombs and left them with Hung before they checked the spots where they would plant the bombs, then return to deep South.

The cells then went up to Bangkok again on July 31 and took the bombs from Hung to plant and fled back to the deep South on Thursday before the bombs went off Friday morning.

The source said investigators believe the bombing was connected to the southern insurgency and that the timing of bombings was close to the celebration of Patani State, which used to include the three southern border provinces of Pattani, Narathiwat and Yala and four districts of Songkhla.

Since the case was related to the southern insurgency, Hung would be detained under the emergency law that allows the authorities to detain suspects 30 days without charges.