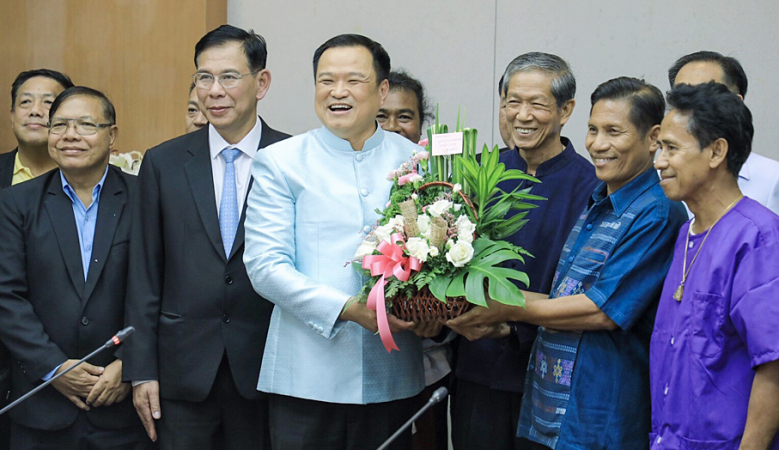 Public Health Minister Anutin Charnvirakul this week signed three ministerial regulations aimed to facilitate the medicinal use of cannabis. They include the legal status reinstatement for some 3,000 folk practitioners, including Khao Kwan Foundation president and activist Decha Siripat, so they could prescribe cannabis without violating narcotic laws.

During his meeting on Tuesday with 20 folk practitioners led by Decha, the minister regaled them with details of his decision to sign the amended ministerial regulation ratifying their status so without their having to undergo the extensive process of checking and ratifying that was required under the previous regulation.

He also shared what they saw as more good news – Decha’s cannabis oil formula would be tabled for the narcotics control committee's consideration on August 13. Products made according to the formula had been distributed by the foundation to cancer patients until that was stopped five months ago.

Anutin also signed two amended regulations, said Food and Drug Administration secretary-general Dr Tares Krassanairawiwong. The first regulation sets the criteria for cannabis-mixed medicinal formulas for treating ailments or for research, and the other details the criteria under which Thai practitioners of traditional medicine, as well as folk practitioners, would be allowed to make or prescribe cannabis-mixed medicines.

Thai practitioners of traditional medicine, as well as folk practitioners, would now be able to more conveniently make or prescribe cannabis medicines without waiting to use the marijuana supply from the Department of Thai Traditional and Alternative Medicine as the previous rule had required, Tares said.

Thai Holistic Health Foundation committee member Rosana Tositrakul also took the opportunity to propose to Anutin that Thai traditional medicine practitioners, and particularly the folk practitioners who are legally ratified and are giving away free medicines to people, should be the first group allowed to grow marijuana plants for use by their patients.

That should be a higher priority, she said, than a proposal to allow "Aor Sor Mor" village health volunteers and the general public to grow six marijuana plants per family. Rosana said she believed that Thai traditional medicine practitioners and folk practitioners would not abuse this right as they could face revocation of their licence or permit and criminal punishment.