The Mekong River level in the northeastern province of Nong Khai on Wednesday continued its rapid rise – up two metres in a single day – prompting sand-digging operators and workers on both Thailand and Laos riverbanks to move their machines and sand to higher ground to evade the torrential water.

The situation also saw many “Poh Phae” floating platforms and floating fish-raising baskets that had not been adjusted for such a water rise to become tilted and forcing people to make quick adjustments to prevent them from sinking.

On Wednesday morning, the river level was 5.97 metres high, about two metres higher than the previously day’s 3.88-metre level, and was now 6.23 metres below the riverbanks, the provincial hydrological office of the Water Resources Department reported. It was expected that after this particular water mass had passed the border town, the Mekong level on Thursday would drop rapidly too, the office said. The Mekong level at the upstream Chiang Khan district of Loei province had dropped by 61 centimetres as of Wednesday morning. 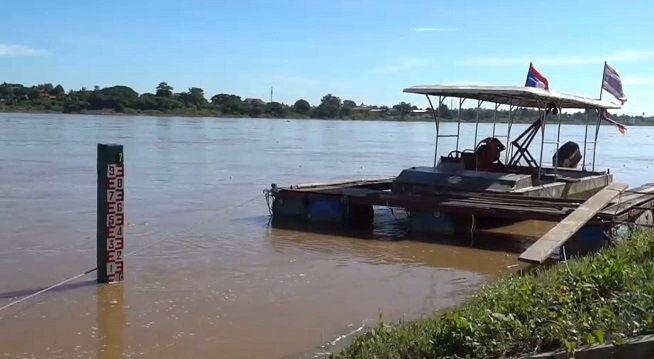 The sudden rise of Mekong level was attributed to a massive volume of upstream runoff from Northern Thailand and Laos due to heavy rains brought by tropical depression Wipha.