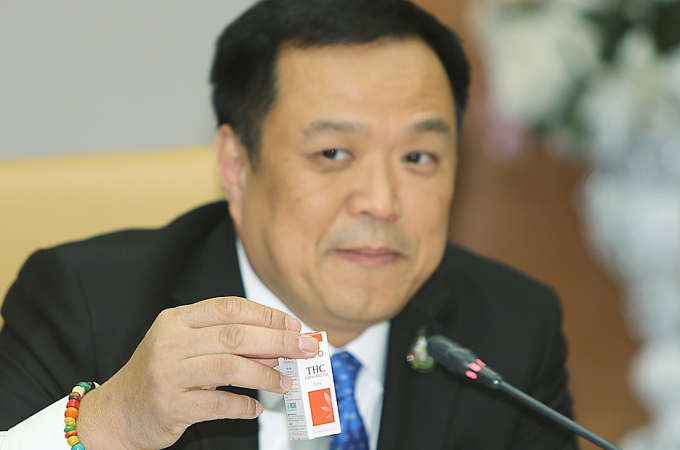 Public Health Minister Anutin Chanvirakul holds up a bottle of cannabis oil during a press conference at the ministry’s head office in Nonthaburi province on Wednesday. (Nation Photo/Pramote Putthaisong)

After receiving the first batch of legally produced cannabis oil on Wednesday, Public Health Minister Anutin Charnvirakul revealed an ambitious plan to make up to a million bottles of the extract available for medical use in Thailand within the next five to six months.

He said this aim is achievable because the Government Pharmaceutical Organisation (GPO), the Chaophraya Abhaibhubejhr Hospital in Prachin Buri province and the Department of Thai Traditional and Alternative Medicine will be producing up to 200,000 bottles of the extract every month from September onwards. 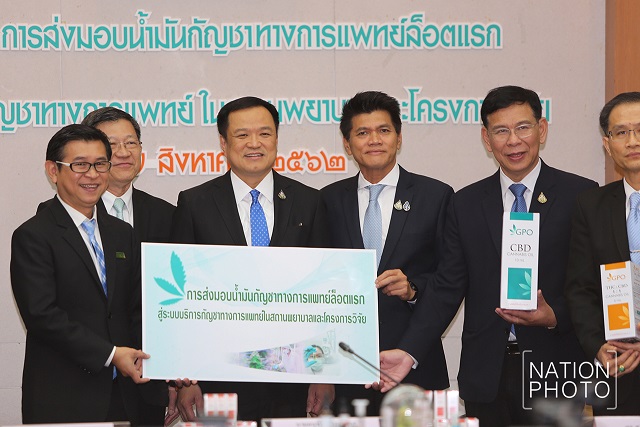 This first batch will be distributed to 12 public hospitals nationwide and to patients participating in medical research projects. While handing over the 4,500 bottles of the extract produced by GPO, Anutin said the oil was free of contamination and suitable for medical use. The 5-millilitre bottles contain medical grade THC cannabis oil for sublingual use.

“There is nothing [in the cannabis oil] that can cause any harm to society or cause addiction or accident if it is used under a doctor’s supervision,” said Anutin, whose Bhumjaithai Party’s flagship policy was called “ganja seri” or the liberalisation of cannabis. 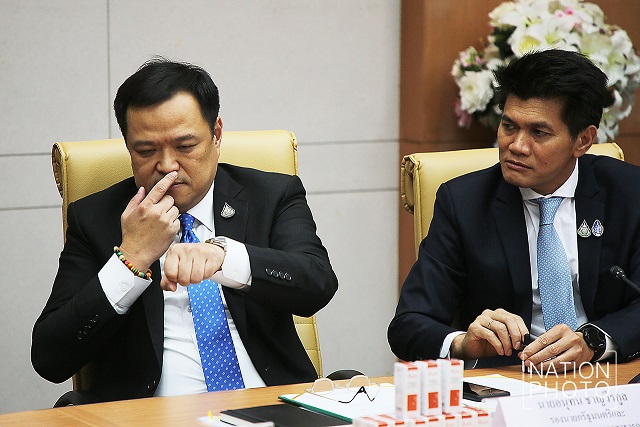 Anutin, who is also deputy prime minister, said the extract will be distributed to 12 hospitals, each in a specific public health region, as well as sent to eligible patients participating in medical research programmes or those in dire need for the oil such as sufferers of severe side effects of chemotherapy, epilepsy patients who have developed a resistance to drugs, multiple sclerosis patients and cancer patients in the terminal phase. 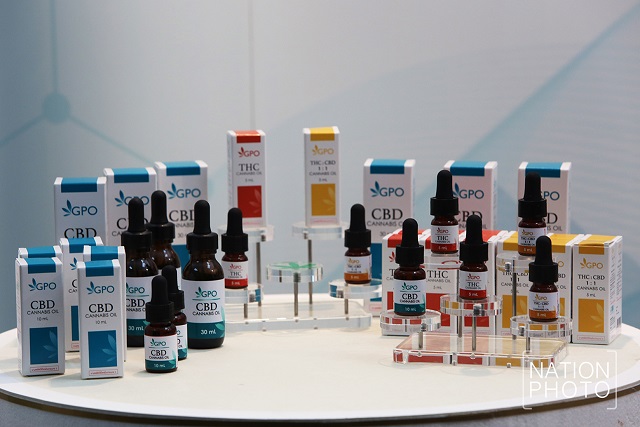 The GPO-produced extracts come in three variations: one with high tetrahydrocannabinol (THC), one with high cannabidiol (CBD), and another with both components at the 1:1 ratio, Anutin said. He added that the ministry will receive another 500 bottles (10ml) of the medical-grade high-CBD cannabis oil and 1,500 bottles (5ml) of the medical-grade THC:CBD cannabis extract later this month. 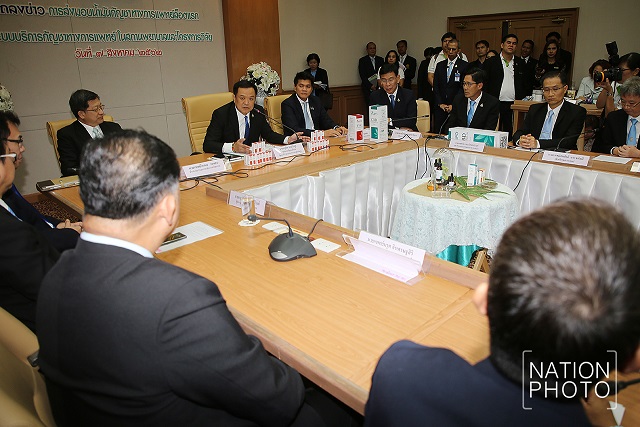 Dr Sukhum Kanchanapimai, permanent secretary for Public Health, said his agency has established clinics to provide a mixture of modern and traditional medicine at 19 pilot hospitals where personnel have already been trained and registered to prescribe cannabis oil to patients and provide consultation after use. He added that the agency will also train village health volunteers and health personnel to provide accurate information about the correct use of cannabis extract. 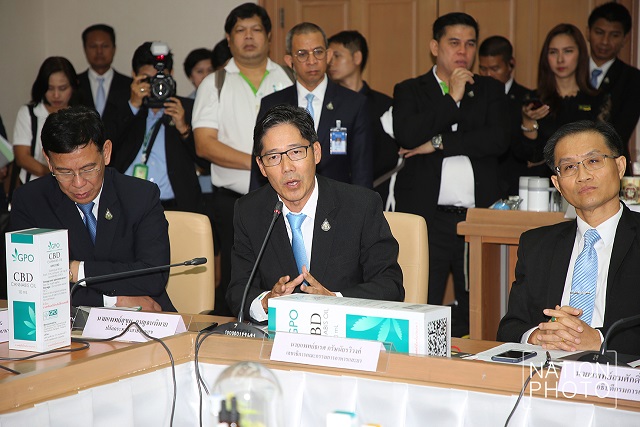 Dr Somsak Atthasilp, director-general of the Department of Medical Services, said 100 5ml bottles of high-THC cannabis oil will be used in cancer cell lab tests and 500 bottles will be used on lab animals. Also bottles of THC:CBD and high-CBD formulas will be sent to the National Cancer Institute for use in research on cancer and epilepsy patients.

Somsak also said clinics providing consultation on the use of medical marijuana were established at the National Cancer Institute and hospitals, and the number of these clinics will be increased to 32 within this month. People can also seek advice round the clock via the 1165 hotline.

Dr Opas Gakwinpong, chief of the Medical Sciences Department, said his agency has developed several tests to ensure the safety of cannabis oil to prevent contamination and ensure quality, while a “coordination centre for marijuana lab tests” was also set up to maintain good lab-practice standards for safe and effective use of medical marijuana.

Dr Tares Krassanairawiwong, secretary-general of the Food and Drug Administration, said his agency and GS1 Thailand has launched a smartphone app (available on Android now and will be available for iOS by mid-August) for people to check information by scanning the two-dimensional barcode (GS1 DataMatrix) on labels. The FDA is also urging people to report substandard products or harm sustained from the use of cannabis oil via its website www.fda.moph.go.th. 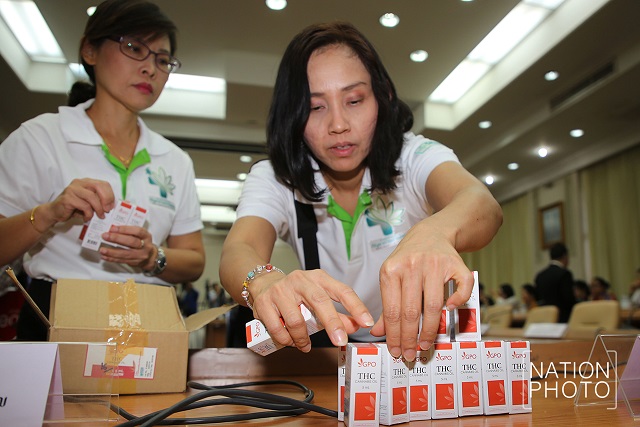 GPO chairman Dr Sopon Mekthon affirmed that medical-grade cannabis oil produced by GPO was safe and with the active ingredients being efficient and consistent.

The second batch from the first harvest of marijuana crop – grown under controlled light and temperature to ensure the crop is free of fungus and has the correct amount of THC and CBD – will yield another 3,500 bottles of the extract by September.

The second harvest of marijuana will yield about 10,000 bottles of oil in about five months, before the production pace can pick up and produce up to 30,000 bottles every month, he said. In the second phase, when the growing space is expanded early next year, the GPO will manufacture up to 150,000-200,000 bottles a month, before the third phase can see industrial level production, Sopon estimated.

Dr Kiattiphum Wongrajit, chief of the Mental Health Department, said his agency has produced a form for risk assessment and guidelines for patients to ensure safe use of cannabis oil and prevention of mental illness. 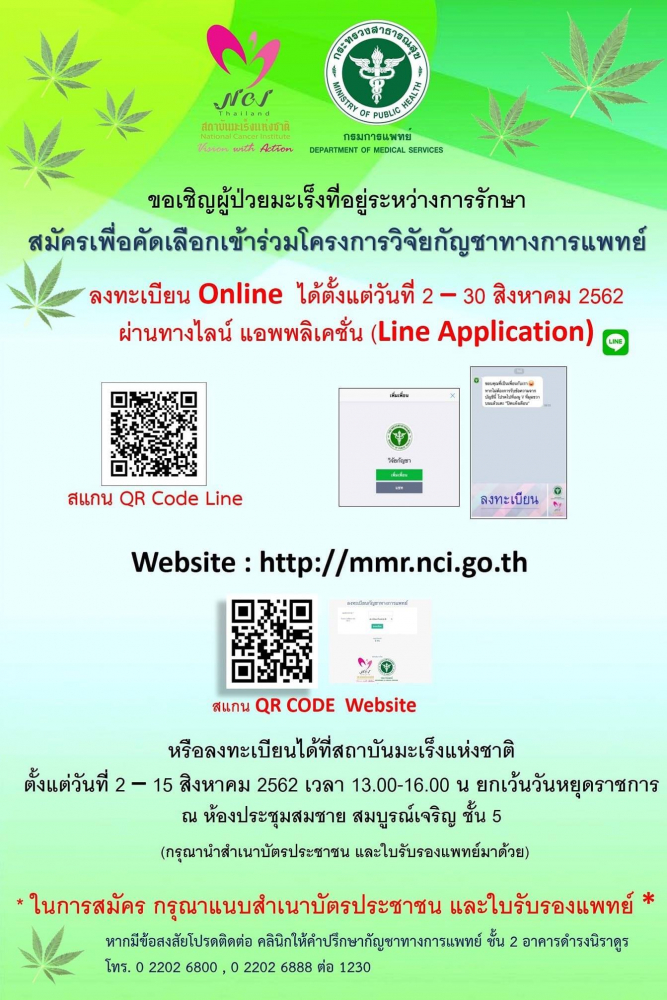 In related news, the National Cancer Institute is inviting cancer patients to apply for participation in the medical marijuana research programme, for which people have until August 30 to submit an application via mmr.nci.go.th or until August 15 if they want to submit it in person at the institute. Applications can be submitted from 1pm to 4pm on weekdays except public holidays. They can also call (02) 202 6800 or (02) 202 6888 extension 1230 for more information.