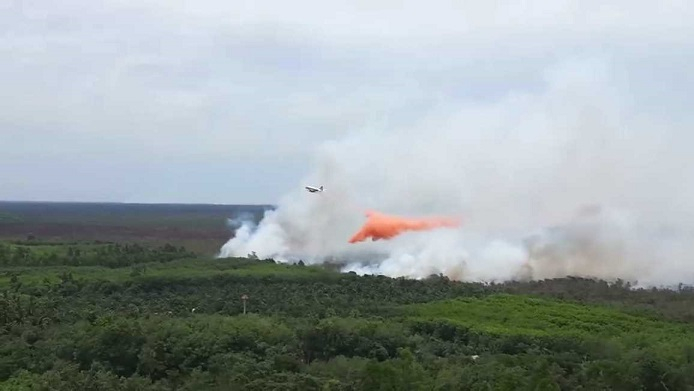 Photos showing two MI-17 helicopters joining the fight to douse the wildfires engulfing Khuan Khreng peat forest in Nakhon Si Thammarat province were released on Thursday along with the news that several forest fire-fighters has developed respiratory difficulties due to exposure to the haze. One case of acute pneumonitis had been diagnosed.

The two choppers took turns to transport water from the Cha-uat-Phraek Muang canal in Chian Yai district to pour on the spots fire-fighters were unable to access on foot, while Fourth Army Region soldiers joined officials and volunteers in an attempt to contain the blaze though strong winds were severely hampering efforts. Smoke from the fire was causing a dangerous level of PM2.5 – airborne particulates 2.5 microns or less in diameter – in the area with readings showing 86 micrograms per cubic metre of air. The safe limit of PM2.5 is 50. This caused several officials to develop respiratory difficulties and one northern-based official, Thananat Tuida, was hospitalised with acute pneumonitis. 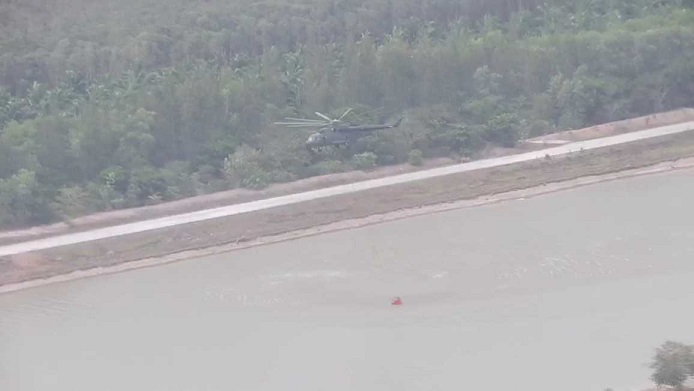 As of Wednesday (August 7), a satellite monitoring report cited more than 50 hot spots in Khuan Khreng peat forest and nearby areas. The peat forest fire, which started last Tuesday and led to three districts being declared disaster zones, was contained by Friday but re-ignited on Sunday (August 4) and continues to burn. Officials have dubbed it the worst in 20 years:

Meanwhile, Royal Irrigation Department (RID) chief Thongplew Kongjan on Thursday noted that Agriculture and Cooperatives Minister Chalermchai Sri-on was worried that the Khuan Khreng peat forest’s ignition spot in Cha-uat could spread to the nearby Kuan Khanoon district of Phattalung province and had instructed the RID to push more water into the Cha-uat-Phraek Muang canal to keep the water level high so helicopters could collect water to dump on the blaze, thus allowing the fire-fighters on the ground to move further in. He added that the two choppers had collected a combined total of 112,000 litres in 32 trips so far and 31 water pumps were also in use. 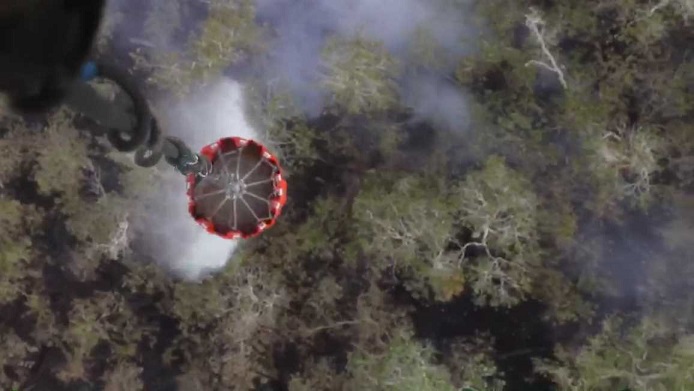 Most fire-hit areas were under control but several spots were still ablaze so officials would fight on until the situation was back to normal, Thongplew said.

A report from the forest fire control command centre said that so far 91 accumulated fire spots had been found within the vast peat forest damaging 5,028 rai. The bulk of the fire-damaged land comprised wildlife sanctuaries and forest reserves while 201 rai were Sor Por Kor agricultural land plots and 520 rais belonged to others.