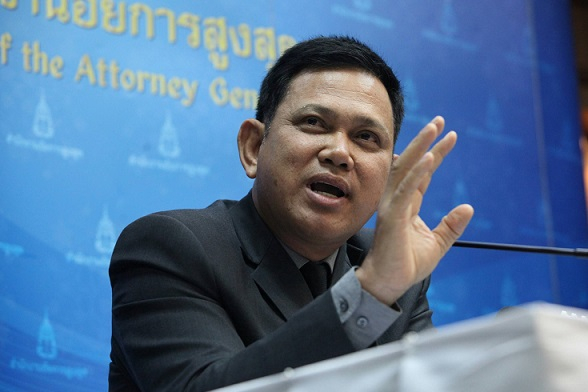 File Photo: Prayut Phetchakhun, deputy spokesperson at the Office of the Attorney General

Public prosecutors have decided to postpone their decision to next month on whether to indict 29 suspects, including former Loei police chief Pol Maj-General Suthip Palitkusolthat, in a Bt600 million fraud and embezzlement case, which included many victims, as well as 192 police officers who lost Bt240 million.

Prayut Phetchakhun, deputy spokesperson at the Office of the Attorney General, told reporters on Thursday that prosecutors from the agency’s economic and environment case office were still waiting for additional information and evidence, and hence will decide on the morning of September 10 on whether to indict the suspects for public fraud and violation of the Emergency Decree on Loans Amounting to Public Cheating and Fraud.

Apart from Suthip, the other key suspect in the case is Thiyada Wipaworakan, a former court official in Chiang Mai and Khon Kaen who in 2013 reportedly invited her acquaintances in court and in the police force to invest in a venture that promised returns of 4 per cent per week. The venture turned out to be a pyramid scheme in which newcomers’ investment was used to pay dividends to existing members until funds ran out, police said.

The group also invited Suhtip, who then had his subordinates join the scheme using money from the Loei police savings cooperative. In the end, both his subordinates and civilian investors got no returns and ended up losing as much as Bt600 million.

Deputy National Police chief Pol General Rungroj Saengkhram, in his capacity as chief investigator, had in June submitted a 72,560-page case report to prosecutors and recommended the indictment of Thiyada, Suthip and 27 others – five of whom are also public prosecutors and judges.