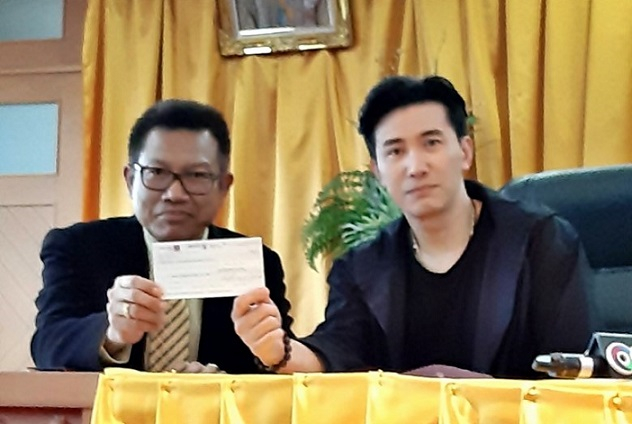 File Photo: TV news anchor Kanchai “Noom” Kamnerdploi, right, and lawyer Decha Kittiwittayanan hold up a cheque for Bt800,000, which will be added to the Bt41.75 million already given to court in compensation for the nine deaths and injuries sustained from a 2010 road accident involving an underage driver, known by her nickname “Praewa”.

Now that the family of Orachon “Praewa” Devahastin Na Ayudhya has submitted the full compensation amount to court, lawyers representing the 27 individuals affected by the 2010 road accident submitted documents with the Civil Court on Thursday to collect the sums owed.

The funds will be wired to each person’s bank account. Those with accounts in Krungthai Bank will receive their money on Friday, while those with accounts in other banks will get their funds by August 13, Civil Court chief judge Opas Anantasomboon said on Thursday, as he announced that the case had been concluded now that compensation has been paid.

The family had handed in Bt42.54 million, but later it was discovered that one victim’s share had been miscalculated, which resulted in the defendants paying Bt500,000 more than they should have. This amount can be collected by the defendants next week, a source at the court said.

TV news anchor Kanchai “Noom” Kamnerdploi had on Tuesday submitted a cheque of Bt41.75 million to the Civil Court on behalf of Praewa’s family, and when the amount was found to be short by about Bt800,000 due to a miscalculation, Kanchai submitted another cheque to court on Wednesday.

On December 27, 2010, Praewa – then a teenager and too young to legally hold a driver’s licence – crashed her borrowed car into a van filled with passengers on the elevated tollway in Bang Khen district. Nine people were killed and six others injured.

Some survivors complained last month that they had not received any compensations for the accident, even though the Supreme Court had on May 8 ruled that Praewa, her parents and the owner of the car she was driving had to pay a combined Bt25 million plus interest to those injured and the next of kin of those killed.

The Justice Ministry said if compensation was not paid by August 28, then the Execution Department would auction off the assets owned by those convicted to ensure the victims’ families get what is owed to them in six months.

The criminal procedure related to this case has also been concluded as the Supreme Court dismissed Praewa’s appeal in 2015. The Appeals Court’s ruling sentenced her to two years in jail, which was suspended for four years. She was put on probation for three years and ordered to perform 144 hours of community service, which she completed in 2016. Praewa has also been banned from driving until she is 25. She turns 25 this year.