HONG KONG — Several hundred protesters, mostly young and wearing black T-shirts, crowded the arrivals hall at Hong Kong airport on Friday, ahead of a weekend of protests planned across the city.

In preparation for the mass protest, the city's Airport Authority said earlier on Friday that only departing passengers with travel documents will be allowed to enter the terminal as anti-government activists gear up for a three-day rally to raise awareness among tourists entering the city.

The move comes as officials confirmed on the same day that a police commander who oversaw operations during the illegal “Occupy Central” protests in 2014 and the Mong Kok riot in 2016 that roiled the Special Administrative Region (SAR) has been recalled to help deal with protests that have plunged the financial hub into crisis.

Former deputy police commissioner Alan Lau Yip-shing has been appointed to help handle large-scale public order events and steer operations, including activities to mark the 70th anniversary of the founding of the People's Republic of China on Oct 1, the HKSAR government said in a statement.

Lau joined the police as inspector in 1984 and was promoted to senior assistant commissioner in 2013. Between 2000 and 2003, he was seconded to the Airport Authority to oversee aviation security services.

Activists plan to converge on the airport on Friday afternoon, with more protests planned across the city at the weekend. On July 26, thousands of black-clad protesters occupied the airport’s arrival area to stage a massive sit-in against the government’s handling of the now-suspended extradition bill, inconveniencing travelers.

"To maintain the smooth process of the departure procedures of passengers and the terminal operation, only departure passengers with an air ticket or boarding pass for the next 24 hours and a valid travel document, or airport staff with identity proofs will be allowed to enter to the check-in aisles at Terminal 1," the Airport Authority said in a statement. 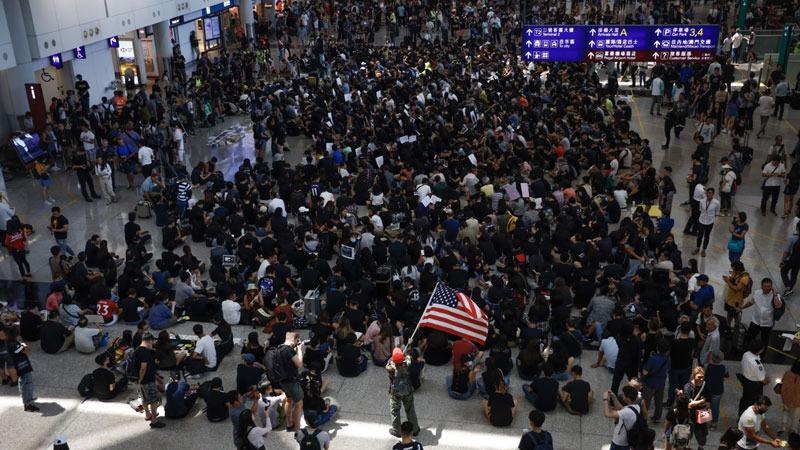 HKIA, one of the world’s busiest aviation hubs, handled about 7.5 million passenger trips in 2018 and offers transit shuttles to more than 110 mainland cities, according to the airport’s latest report.

The government on Thursday said tourist arrivals dropped 26% at the end of last month compared to last year and were continuing to fall in August. The travel industry accounts for 4.5% of the financial hub's economy and employs about 2500,000 people, or about 7% of the total working population.