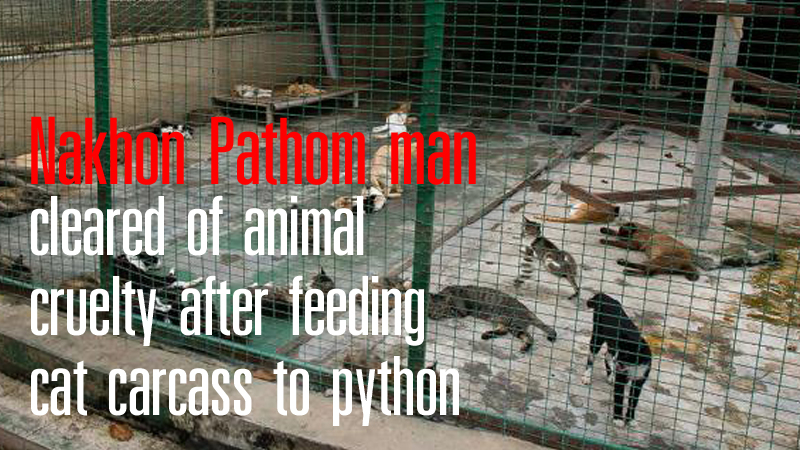 A man in Nakhon Pathom’s Bang Lane district has been cleared of animal cruelty after a Facebook post showed him feeding his pet python with a carcass of a cat, Watchdog Thailand said.

Watchdog Thailand said the man was cleared on the animal cruelty charges after the officials found that he fed the carcass of a cat killed by a car to his python.

Watchdog Thailand added that the man was found to have proper a license to keep two golden pythons and three other pythons as pets. He was also found to have five foreign species of turtles in his possession but the law does not require him to register them.

On Monday, Watchdog Thailand reported on its Facebook page that it had asked the man to report to the Bang Lane police station after his Facebook post that drew an outcry from animal lovers.

The man initially stated in the post that he caught the cat to feed his python but he later amended the post that the cat was hit and killed by a car so he fed the carcass to his snake.

In the first post, the man claimed the cat belonged to his neighbour and was a nuisance to him, often straying into his house to urinate and defecate, so he fed it to his pythons.

Watchdog Thailand said it asked the Bang Lane police station to conduct an investigation of possible animal cruelty because the group had learned that some python breeders had pretended to adopt kittens from some Facebook pages and feed them to their snakes.