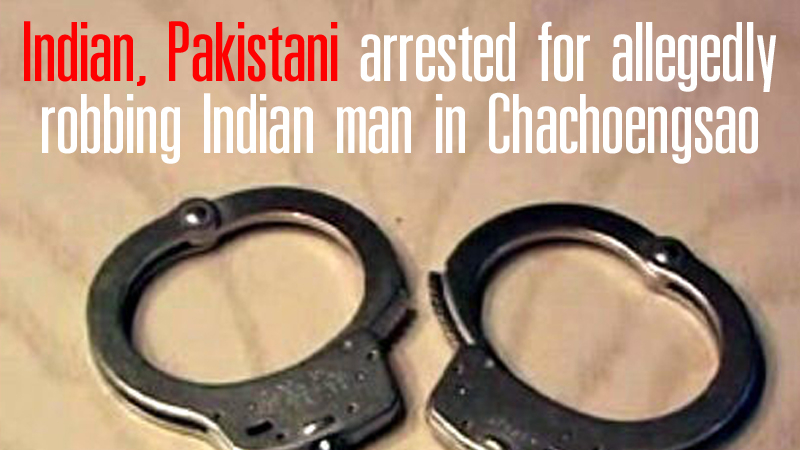 An Indian man and his alleged Pakistani accomplice have been arrested for allegedly robbing another Indian man who was seeking a job in Thailand, Thai immigration police said on Tuesday.

Immigration Bureau chief Pol Lt-General Sompong Chingduang held a press conference on Tuesday to announce the arrest of Kuldip, an Indian national, and Mohammad, a Pakistani. Sompong did not release the two suspects’ surnames.

Sompong said the two were arrested under warrants issued by the Chachoengsao Court in July.

The two allegedly robbed their victim, whose name was withheld, on June 25 on a road in Tambon Nong Haen in Chachoengsao’s Phanom Sarakham district after they told him they would drive him to Pattaya to apply for a job.

Sompong said the victim was lured to Thailand to be robbed after he visited the Tesco Man Power Thailand page on Facebook to seek information on possible employment.

The two suspects convinced the victim they could secure him a job in Pattaya.

The victim flew to Bangkok on June 25 to meet the two suspects, who promised to drive him to Pattaya but instead took him to a remote spot in Chachoengsao.

The two allegedly snatched cash and a mobile phone with a total value of B100,000 from the victim, then threw his bag and passport out of the car. When the victim left the car to collect his belongings, the two sped off.

The victim filed a complaint with Nong Haen police station, which in turn sought help from the Immigration Bureau.

The victim flew back to Thailand to identify the suspect on July 25 and provide more information on the second suspect, who was subsequently arrested at a condominium in Onnuj after the court approved his arrest warrant on July 31, Sompong added.