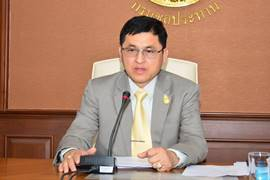 The Office of the National Water Resources (ONWR) held a meeting with representatives from countries in the Mekong River Basin to come up with strategies to cope with the drastic changes in the river’s water level. The meeting was attended by representatives from four countries, namely Thailand, China, Myanmar and Vietnam. The representative from Laos was unable to join due to schedule conflicts.

ONWR secretary-general Somkiat Prajamwong said the meeting aimed to establish Mekong-Lancang Cooperation and seek suitable strategies to handle water-related problems as well as promote sustainable development in the region with the help of modern technology.

“ONWR and the neighbouring countries aim to exchange information about water levels in different parts of the region via technology and social networking,” he said. “Sharing this information will be extremely useful in planning measures to mitigate the impact of flood/drought disasters and enable related agencies to issue warnings on time.”

Apart from water levels, the countries are also expected to share other key information, such as river flow rate, drainage capability, rainfall statistics and water-usage statistics from communities located along the banks of the river.

“The representatives of China promised to draft a short-term plan, which will later be added to the five-year water resource operation plan [2018-2022],” Somkiat said.

After the meeting, the participants visited local communities and talked to the residents about the problems they are suffering from the drastic change in Mekong levels.

“We talked to villagers along the river to explore the impact dropping water levels is having on their occupation, daily consumption, agriculture, fishery, tourism and transport. The hope is to use this information to formulate a more efficient water-management strategy,” he said.