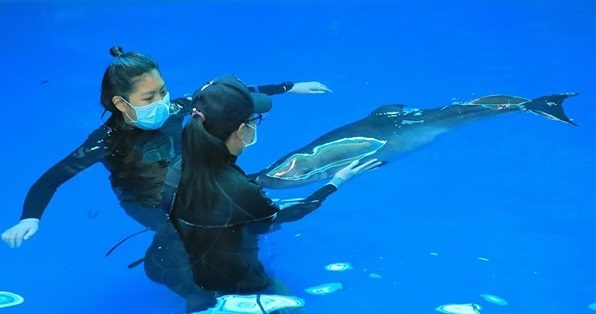 Photo Courtesy of the Department of Marine and Coastal Resources

Hope, a metre-long, 15-kilogram baby whale was rescued on August 4 by villagers after being beached in Thai Muang district’s tambon Na Toei along with its 2.4-metre-long, 150kg mother. Both Hope and its mother had abrasion wounds, which became infected. The mother did not survive, while Hope was delivered to the centre. Despite every attempt to treat Hope for nine days, she died at 11.23pm on Monday, Kongkiat said.

Separately, Department of Marine and Coastal Resources director-general Jatuporn Burutpat said he has talked to related agencies about moving the orphaned six-month-old dugong “Mariam” to a temporary nursery pond on land, because the baby dugong has been in shock since it was chased by a male dugong looking to mate during low tide on August 7. Mariam was apparently so shocked that she refused milk and would only eat a little seagrass. Then on August 10 she suffered cardiac arrest, prompting the veterinarians to give her a cardiac stimulant and put her under 24-hour watch.

Jatuporn said Mariam, who is in stable condition but still needs a two-week course of antibiotics, will be either moved from the sea to a temporary pond in Duyong Bay area, or at Rajamangala University of Technology Srivijaya’s Trang Campus or the Phuket Marine Biological Centre – the last two sites would require a helicopter lift and the Third Naval Region had already prepared an aircraft for the mission.

As of Tuesday, the university had already prepared a six-metre octagonal pond as well as a large nursery pond with good circulation system, and manpower to look after Mariam. The baby dugong became a social-media sensation since she was rescued in Krabi in late April and placed under the care of a dugong conservation centre in Trang’s Koh Libong.

Meanwhile, Yamil, a three-month-old baby dugong which was rescued in Krabi on July 1 with abrasions on more than 50 per cent of its body, is making good recovery and will remain in a closed pool at the Phuket Marine Biological Centre for a little longer, Jatuporn said.