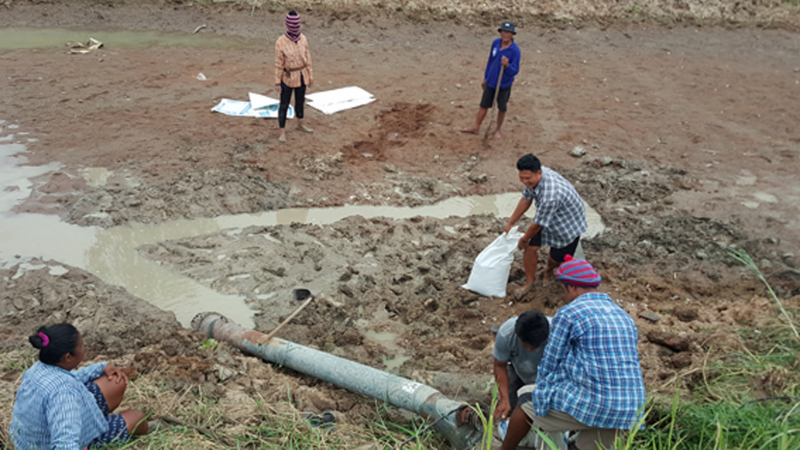 Locals in the Si Khiu district of Nakhon Ratchasima province launched protests over the Irrigation Department reportedly allowing Khonburi Sugar Company to tap 20,000 cubic metres of water per day from the Lamtakong reservoir amid the drought situation in the area.

Twenty angry people led by Sureerat Dangul took part in a protest, holding posters against the government’s approval for the company to use water from Lamtakong. “The governor says that Nakhon Ratchasima faces drought every year. So why is the government agency worsening the drought situation by allowing the sugar company to use the water? You are stealing water from the people. Please help us, governor! ” Sureerat said. She revealed that local farmers had to stop growing rice, as water was insufficient for daily consumption, and some farmers had even let their rice crop perish.

The protesters requested relevant authorities to inspect the factory and check if it had been given permission to construct raw-water pipelines and a pumping plant against government regulations. They also alleged that land reclamation by the company was blocking the natural waterway.

The villagers claimed that the factory had never bothered to ask if there was enough water for the local people.

Later, a representative of the Marine Department said that the company’s request was going through the approval process while all the documents for land reclamation had not been provided yet.

The director of the Lamtakong operation and maintenance project said the sugar factory had submitted a request to access water, but permission was yet to be granted as they needed to submit additional documents.

Deputy Agriculture and Cooperatives Minister Thamanat Prompow visited Surin province to closely monitor the drought situation there and find a solution. He cooperated with the Second Army Unit, Armed Forces Development Command and relevant authorities to dredge groundwater and install a water purifier.

As a long-term plan, he has directed relevant agencies to create artificial rain in dam and agricultural areas constantly and prepare development plans for local water reservoirs.

Meanwhile, the South of Thailand was in the grip of a storm and heavy rains. Apirat Kongsompong, the Army commander in chief, directed the Army Disaster Relief Centre to remain alert and evacuate people from risky areas in case of flash flooding and landslides. If there were heavy rains in drought-hit areas, the Army would collaborate with relevant agencies to store the water for the future uses.