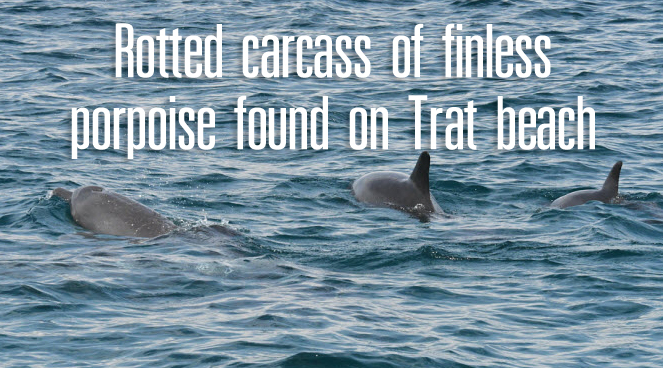 The rotted carcass of a finless porpoise was found on a beach on Koh Chang in Trat Wednesday evening, officials said.

Nitchai Phanthudej, chief of the inspection unit of the Mu Koh Chang National Park, said he was alerted by staff of the Centara Resort in the island’s Ban Klong Makok area that the carcass had washed up on the beach in front of the hotel.

Officials identified it as a male finless porpoise about nine years old and measuring about 1.37-metres in length and with a body width of 37 centimetres.

It had a deep cut on the left of its back. Officials believe it was fatally wounded by a boat propeller about 10 days ago.

Officials took samples of its skin and teeth to analyse and buried the carcass.

Officials of the park said five dolphins and porpoises have been killed after becoming trapped in fishing nets or struck by boat propellers in the Mu Koh Chang park area since January.