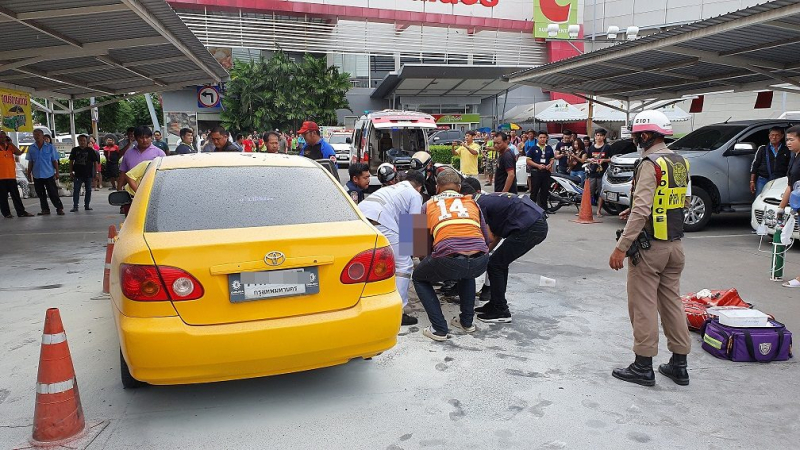 The driver of an unlicensed taxi was severely burned after he apparently set himself on fire while driving near his taxi stand in Samut Sakhon’s Muang district Wednesday, police said.

Pol Lt Rosarin Patpong, deputy inspector of the Muang Samut Sakhon police station, was alerted of the incident at noon.

Somchai Banludee, 60, opened his taxi’s door and dropped onto the ground after fire broke out inside the vehicle, engulfing the vehicle’s interior. He was rushed to the emergency unit of the Samut Sakhon Hospital where doctors found 80 per cent of his body covered by burns,

His taxi caught fire about 100 metres before reaching the taxi stand of the Big C shopping mall on Setthakij 1 road in Tambon Tha Sai. Somchai’s taxi then hit a taxi at the stand, pushing it into another taxi and motorcycle parked ahead.

Taxi drivers at the stand said Somchai used a decommissioned taxi to pick up passengers at the stand regularly. He recently complained of poor health, saying he wanted to die.

Police found a strong smell of petrol inside the taxi and believe the man set fire to himself.

His wife, Supasorn Singheng, 60, said Somchai told her that he was going to settle differences with some taxi drivers at the stand.

But taxi drivers at the stand said they had no conflicts with Somchai. They said they saw Supasorn come to the stand to ask Somchai to go home but Somchai locked the door and threw his wallet to his wife and told her to take a taxi home.

“Do you want to die with me?” Somchai was heard shouting to his wife, they told police.