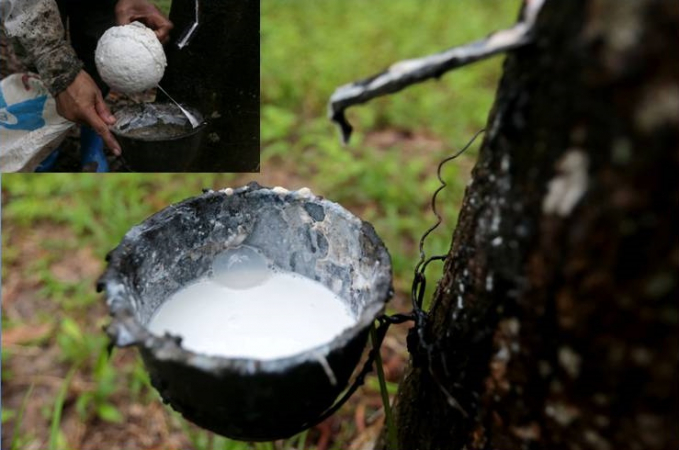 Agriculture and Cooperatives Minister Chalermchai Sri-on has proceeded with the implementation of an urgent price guarantee measure for grade 3 raw rubber sheets to be sold at Bt60 per kilogram to assist 1.43 million rubber farmers who have suffered losses in the past five years as a result of the falling prices of latex and rubber sheets.

The recent meeting of a working team on agricultural produce price guarantee, presided over by Chalermchai, resolved to implement the Bt60 per kilogram price guarantee measure for rubber farmers with up to 25 rai of more than seven-year-old tap-able rubber trees per head (based on a calculation that one rai yields 250 kilograms per year), said Sunthorn Rakrong, spokesman for the House of Representatives' standing committee charged with studying the palm oil and rubber price slump and president of the Association of Rubber Growers in 16 Southern Provinces.

The prices of latex and cup lump would also be improved based on the Bt60 price reference, the academic criteria and the median prices at the Rubber Authority of Thailand's six nationwide markets, Sunthorn said, adding that these three types of rubber were in farmers' possession and thus eligible for the aid measure unlike the smoked sheets grade 3 that would benefit the middlemen.

For example, if the median price is calculated as Bt40, the compensation would be Bt20 so if a farmer has 10 rai, it meant he would get (Bt20 x 10 rais x 250 kilograms/per rai) Bt50,000 per year. The money to compensate for the price difference so as to keep the price at Bt60 per kilogram could be wired directly to the registered farmers' bank accounts and the amount could be split between the plantation owners and rubber tapers at a 60:40 ratio, he said.

Sunthorn said Chalermchai and the working team on agricultural produce price guarantee would have another meeting on August 21 to set details of the price guarantee implementation. A tripartite meeting (government, private sector and rubber farmers) would discuss the matter and the appropriate payment method.

"The Agriculture and Cooperatives Minister has ordered that we proceed with the measure so that one million tonnes - or 20 per cent out of the five million tonnes produced in Thailand per year - would be bought for processing to cater to the government's promotion of the domestic use of rubber at one million tonnes per year such as for road construction and value-added products. So there is a good chance that the rubber price would reach Bt60 per kilogram. The minister asked farmers to give the government some time,” Sunthorn said.