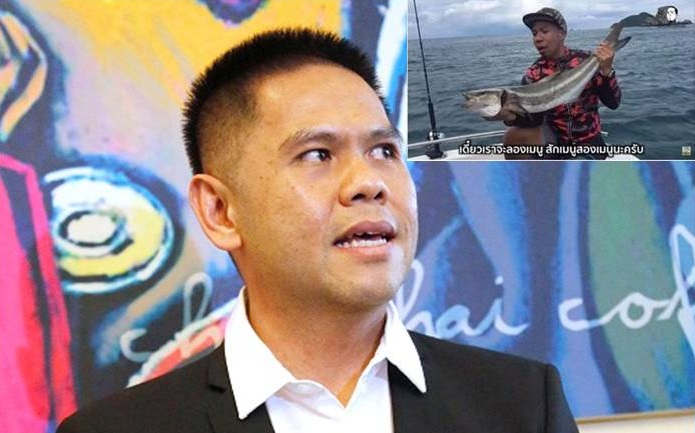 A scene from the video clip uploaded by Poomjai "DJ Poom" Tangsanga after he and six others went fishing within the Mu Koh Chumphon National Park.

Natural Resources Minister Warawuth Silpa-archa has dismissed claims by YouTube show host Poomjai "DJ Poom" Tangsanga that he was unaware he was fishing in the Mu Koh Chumphon National Park as the backdrop for a clip he posted.

"Such actions cannot be sufficiently excused by a claim of a lack of awareness. The Department of Marine and Coastal Resources has clearly set territory lines, hence the boatmen should have known if that area is within the park territory or not," he said.

Public figures like Poomjai should be setting a good example for others, said the minister. He said this case - brought against Poomjai and six others by the Phaya Sua task force which lodged a police complaint earlier this week over the five charges under the National Park Act BE 2504 (1961) - would proceed according to the law.

The clip of the fishing expedition, which reportedly took place and was filmed in August 2017, was uploaded in August last year. The Phaya Sua task force, receiving the complaint about the alleged fishing within park territory, investigated the controversial episode. It was published on August 8, 2018, but removed in July this year. After confirming it took place near Koh Raed, Koh Kalokm Koh Lak Ngam and Koh Lava within the park territory, Phaya Sua task force representative Panatchakorn Photibundit filed the complaint against Poomjai and the six others on Tuesday at Pak Nam Chumphon Police Station in Chumphon's Muang district.

Poomjai, in a five-minute live-streaming clip on YouTube, admitted to fishing in the area but claimed the action was out of a lack of awareness. He thanked officials for doing their job and his fans for their morale support, before promising to contact the authorities about the matter soon.