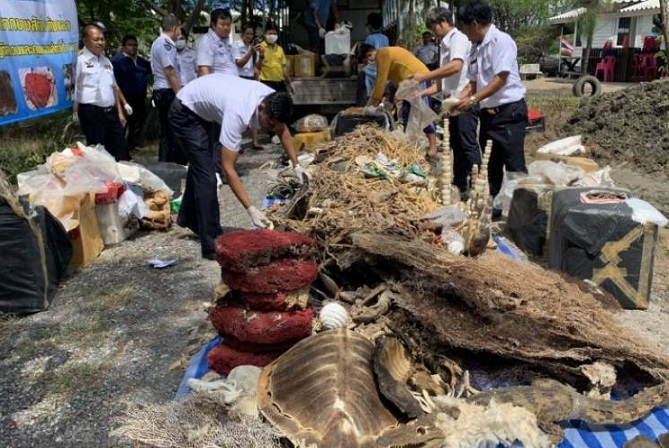 The Fisheries Department held a ceremony on August 16 to destroy marine life remains worth Bt5.5 million that were used as evidence in 10 smuggling cases, the department’s Fish Quarantine and Inspection Division director Khanit Naksang said.

The disposal of the animals seized under the Wild Animal Reservation and Protection Act in 2016-2018 was held at the Coastal Aquaculture Research and Development Regional Centre 2 in Samut Sakhon's Muang district.

The items comprised of dried carcasses of seahorses, pipefish, pieces of coral, Coraline algae, crocodile, soft-shelled turtle, starfish, and geoduck – most of which had been smuggled for medical use, as fashion accessories or aquarium decorations, he said, adding that these were important marine resources with some either nearing extinction or requiring decades to grow.

Noting that the smuggling of these items has continued unabated, with smugglers using many methods to avoid detection, he warned that trafficking in marine life carcasses is punishable by a maximum of four years in jail and/or a maximum Bt40,000 fine. Also, he said, trafficking in endangered animals tarnishes Thailand’s image.

He added that the department was holding a ceremony to destroy the carcasses in a move to raise public awareness.