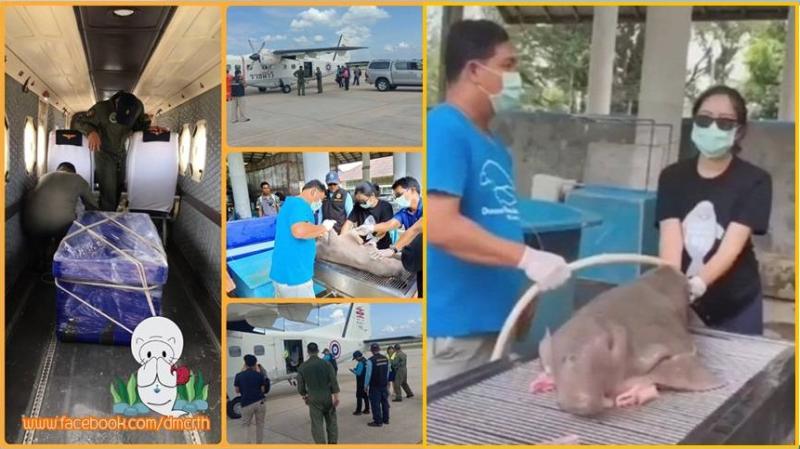 The body of orphaned baby dugong Mariam has been sent to Bangkok for taxidermy prior to being put on display at the Phuket Aquarium, so that the public can learn about the conservation of rare wildlife conservation.

The Department of Marine and Coastal Resources (DMCR)’s Facebook page has published a short video clip showing veterinarians washing the carcass on Saturday afternoon before sending it to Trang Airport. There it was put aboard a Third Naval Region’s aircraft for a flight to Bangkok to undergo taxidermy at Pathum Thani’s National Science Museum.

Even in death, Mariam is seen by veterinarians, officials and “Pitak Duyong” volunteers as a great inspiration for dugong conservation in Thailand, where an international conference on world dugongs is to be held in Trang in 2020.

Mariam became an internet sensation and the new face of sea conservation after being rescued in Krabi on April 29, when the pup was washed ashore in a weakened condition. She was the first baby dugong in Thailand to have people serve as nannies in the natural environment of Koh Libong in Trang. The care of Mariam was subject to an around-the-clock live broadcast on the DMCR’s Facebook page to cater to the Thai public’s interest in her and to boost public awareness of the extinction risks of some 300 remaining endangered dugongs in Thailand waters.

However, the eight-month-old Mariam became sick in early August and, despite efforts to save her, she died on August 17 of shock and was found to have eight pieces of plastic garbage in her stomach.