Police arrested a noodle seller and her husband for the possession of a million methamphetamine pills and 10 kilos of crystal meth or “ice” on August 20 at the Chiang Mai Agricultural Product Exhibition Centre, Provincial Police Region 5 Office’s investigation chief Pol Maj-General Supapol Prembutr told the press.

Following a tip-off that a large haul of drugs will be stored within the centre’s compound, police launched a stakeout for two days until the suspects showed up with the narcotics at 8am on August 20. The centre is located in tambon Chang Pheuk in Chiang Mai’s Muang district. 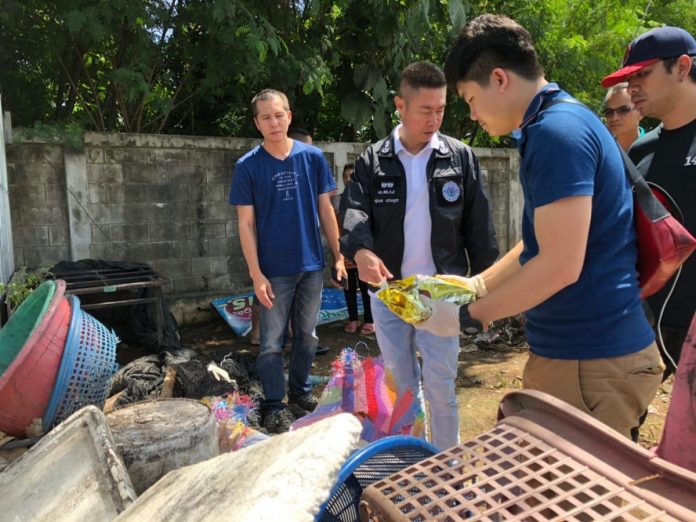 Police arrested noodle seller Kawi Kamonpat, 48, and her husband Supachai, 49, and confiscated the drugs along with their Mazda pick-up truck and Suzuki Swift sedan. Kawi reportedly admitted to police that she brought the drugs from Mae Taeng district to be stored at her noodle shop within the centre’s compound for a payment of Bt100,000. She said the drugs came from a Shan man identified as Zaw Ka, who will allegedly send an accomplice to collect the haul for distribution later.

Insisting that her husband had nothing to do with the movement of narcotics, Kawi confessed to doing this before two years ago, when she was only paid Bt10,000. She said she had taken this job on because she wanted to pay off her debts.

Surapol said he believes the narcotics had been supplied by drug traffickers based in Myanmar’s Wa state and that police will launch an investigation to arrest Myanmar national Zaw Ka and his accomplices.

In a separate press conference on August 20, deputy National Police chief Pol General Chalermkiat Srivorakan said officers from the Narcotics Suppression Bureau had arrested Phrae resident Bancha Soparattakul, 32, along with 1.5 million methamphetamine pills in Sing Buri's In Buri district. The man was caught as he was trying to transport the narcotics – obtained in Chiang Rai – in a pick-up truck to customer in Bangkok.