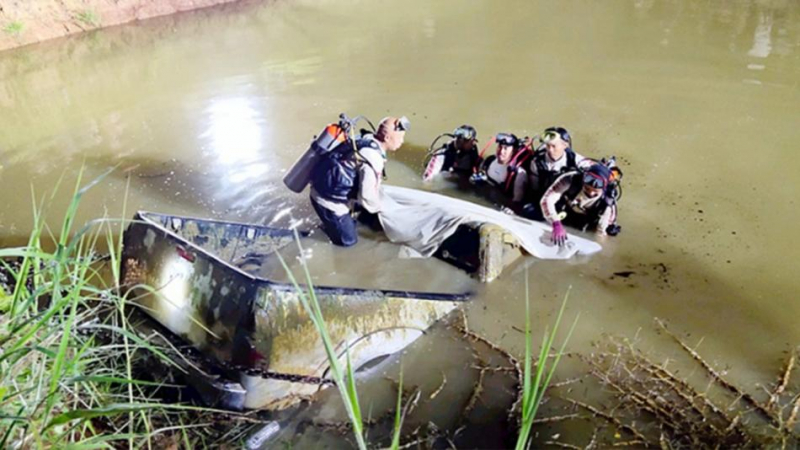 Rescuers found bodily remains inside a pick-up truck at the bottom of a pond in Nakhon Ratchasima’s Si Khiew district, believed to be a man who went missing eight months ago.

Rescuers of the Hook 31 Rescue Unit were alerted on Thursday that shoes with human ankles were found that day floating on a pond near a resort in Tambon Nong Nam Sai.

The unit sent a team of scuba divers to check and found a pick-up truck with human remains inside at the bottom of the pond.

After the pickup and remains were retrieved, the remains were sent to the provincial hospital to undergo the process of disaster victim identification.

The pickup was sent to the Si Khiew police station for a check by officers from the Scientific Crime Detection Division.

Meanwhile, Chanakarn Kotesombat, a local resident of the district, said she believes the remains belonged to her nephew, Wanchai Pim-ubol, a member of the Tambon Nong Nam Sai Municipality’s council.

Chanakarnn said Wanchai and his pickup went missing eight months ago and relatives had filed a complaint with police. She said the pickup belonged to Wanchai.