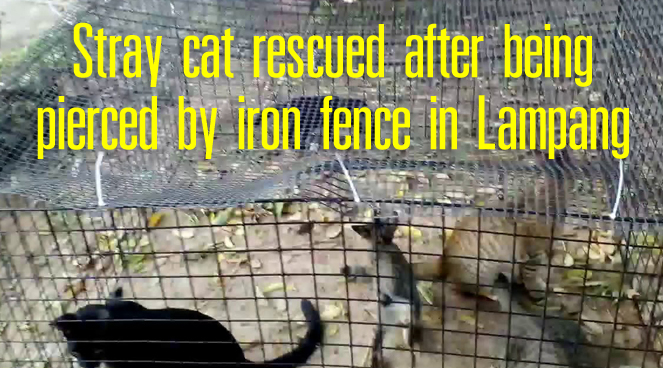 A stray cat was rescued after it was found hanging from an iron fence of a house in Lampang’s Muang district on Friday morning.

Noppadol Horwattanaphan, 60, the owner of the house on Soi Chokchai in Tambon Soptui, called an emergency unit at 7am to rescue the helpless female cat that appeared to be about eight months old.

The pointed iron fence had pierced the cat’s right hip. The animal apparently fell from the roof of the house and onto the fence.

Noppadol said he woke up to give alms to monks and found the poor cat struggling.

Rescuers had to use an iron cutter to cut the pointed end of the fence and the cat was rushed to an animal hospital for vets to perform an operation to remove the iron piece.

Noppadol said the cat is one of several strays living in the area. He would shoulder its medical bill, he said.