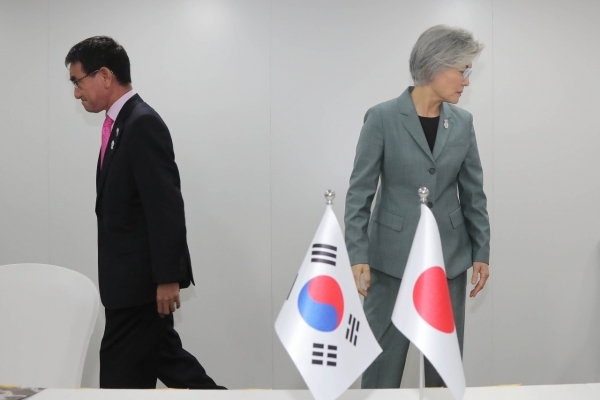 South Korea decided to withdraw from the bilateral military intelligence-sharing pact with Japan on Thursday, amid escalating friction over trade and historical issues.

In a televised announcement, Cheong Wa Dae said it has made the decision to abolish General Security of Military Information Agreement and will notify Japan via diplomatic channels by midnight on Saturday, the deadline for a decision on whether to renew the agreement.

“Under such circumstances, the government decided that it does not coincide with our national interest to maintain the agreement that was signed to exchange sensitive military information.”

Before the announcement, Cheong Wa Dae held a National Security Council meeting to discuss the matter.

The two neighboring countries first signed the military intel-sharing pact in November 2016, with encouragement from the United States, which seeks a strong bond with its Asian allies in the backdrop.

The agreement was set to automatically renew each year, and only be scrapped when one side chooses to end it 90 days before the expiration date.

But as bilateral ties have deteriorated since July when Tokyo placed controls on South Korea’s exports of three vital industrial materials, South Korea has been mulling options to fire back.

Japan also announced that it would remove South Korea from its list of countries for preferential trade treatment in early August. The removal will go into into effect on Aug. 28.

Arriving at Incheon International Airport after a trilateral summit with Japanese and Chinese foreign ministers, Kang also said that Korea and the US would continue to firm up cooperation and that Thursday’s decision on GSOMIA was made due to the issue of trust with Japan.

Just hours before Seoul’s announcement, top officials in Japan stressed the importance of the intel-sharing pact, highlighting that GSOMIA contributes to regional peace and stability.

Reiterating that GSOMIA has been automatically renewed every year, Japan’s Chief Cabinet Secretary Yoshihide Suga had said, despite the strained relations between Seoul and Tokyo, it is important to join forces in necessary areas.

Japanese Defense Minister Takeshi Iwaya had also expressed hope for the renewal of the agreement, saying the agreement would strengthen not only bilateral security cooperation but also firm up trilateral alliance with the United States.

Under GSOMIA, Seoul and Tokyo had exchanged confidential military information of similar levels on North Korea, at each other’s request. They were not mandated to provide the requested information if they choose not to.

Since the deal was forged, the two allies had exchanged information through GSOMIA 29 times as of this month.