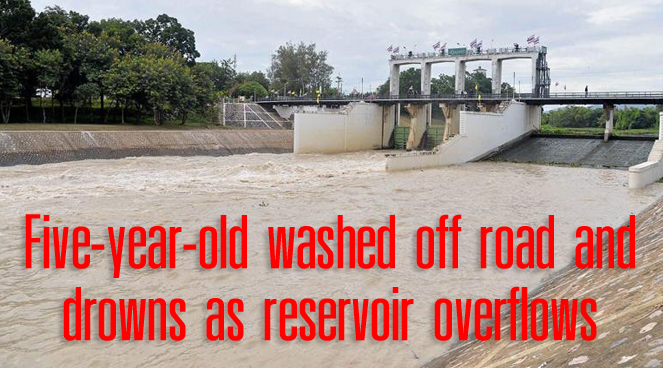 A five-year-old boy was washed off a road by a runoff in Chanthaburi’s Pong Nam Ron district Sunday evening and drowned, police said.

The body of the boy was found about three hours after officials were alerted of the incident at 6 pm at a small reservoir in Moo 1 village in tambon Thap Sai.

Police said the boy was riding his bicycle with his two-year-old brother on the dyke of the reservoir but the water from the overflowing reservoir washed over his bike causing it to topple. Villagers passing the spot were able to grab his brother in time but the five-year-old boy was washed downstream.

Another villager jumped into the creek to try to rescue the boy but the water was murky and he could not find him.

The villagers called a local foundation that dispatched rescuers to search for the boy and they found the body about three hours later.