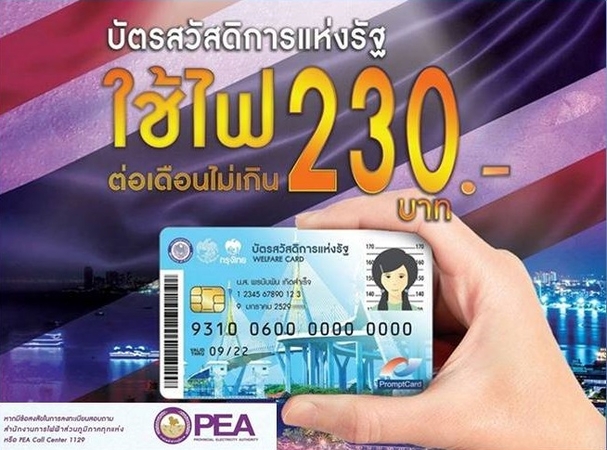 With records for electricity consumption repeatedly broken in Thailand this summer and demand expected to soar even higher, an academic has warned of flaws in the government’s subsidy scheme for reducing power bills.

Wichsinee Wibulpolprasert of the Thailand Development Research Institute pointed out the “loopholes” in the plan as provincial and metropolitan electricity authorities report that power use rose from 29,680 megawatts nationally on April 20 to 30,120MW on April 24 and 31,677MW on April 25 before finally peaking at 32,273MW on May 3.

It has been extrapolated from such figures that Thais will be using up to 50,000MW a day within several decades as more electrical trains, factories and household high-tech appliances come into service. The current charge for electricity is Bt3.60 per unit.

At least 14.5 million people have signed up for the state welfare-card programme. Many of these people who use less than 50 units a month or whose power bills are less than Bt230 are eligible to the power bill subsidy. The subsidy applicants include some three million elderly, disabled or bed-ridden.

Wichsinee pointed out several flaws in the plan. Some 15,000 families don’t have their own power meters since they rent their homes or live in makeshift homes and are thus not entitled to the benefit, she said.

The criterion regarding power use under 50 units per month could prompt some people to apply for the subsidy for second homes that are largely unoccupied, as happened between 2012 and 2015, when Bt830 million in annual subsidies went to second homes under a similar scheme.

Wichsinee suggested dropping such criteria and instead providing the subsidies via state welfare smart cards. It would be better, she said, if officials confirmed the low-income earners' entitlement via the National Statistics Office’s poverty map and the “Aor Sor Mor” programme, by which village volunteers would visit the applicants' homes.

Energy Minister Sontirat Sontijirawong met officials on July 20 to set policy and plug loopholes and they agreed the criteria might require adjustments since many poor families in MEA areas use more than 50 units per month, as critics had said most people would agree with taxpayers’ money helping poor people, but don’t want it spent on a “free handout policy that isn’t useful”.