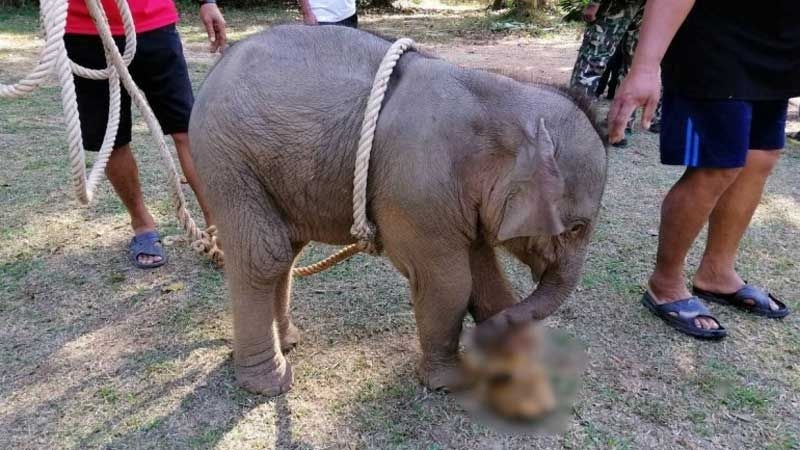 A wild baby elephant injured and abandoned by mother after it fell into an old unused cesspool in Bueng Kan province has fully recovered and attempts will be made to reintegrate it with its herd next month.

Thaweep said officials will try to integrate Chabakaew with the 50 wild elephants that make up the herd and officials expect the other pachyderms will accept the baby.

Thaweep was speaking to reporters after he and Bueng Kan provincial governor Nirand Pongsitthithavorn visited Chabakaew at the Chanane wildlife protection unit.

The baby elephant was found trapped in an abandoned cesspool in a rubber plantation in Ban None Phaisan village in Tambon Khok Kwang in Bung Kla district on April 4. It suffered injuries to its back and tummy.

Initially, officials penned the elephant near the spot it was found, waiting for its mother to take it back but the mother did not show up. Later, the condition of the baby elephant worsened so it was sent to an elephant camp in Tambon Krapho in Surin’s Tha Tume district where it was nursed by an elephant mother and regained is strength.

Nirand said officials of the Elephant Kingdom camp took good care of the Chabakaew for four months and the wounds on its back and tummy had now healed. The baby had also gained 30 kg and now weighed 100 kg.

The governor said wildlife officials decided to start the process of reintegrating Chabakaew with its herd by moving it from Surin to the Chanane wildlife protection unit close to the area where its herd was spotted.

Officials are feeding the baby some 15 litres of milk made from baby milk powder each day, the governor added.

Thaweep added that officials are now preparing Chabakaew by walking it in the forests every day.