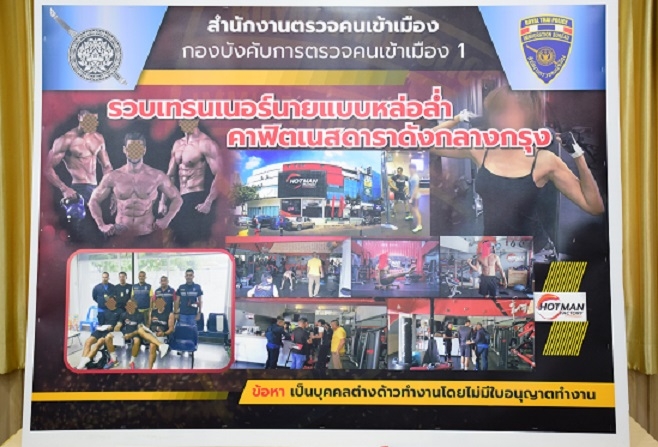 By Supachai Phetchpthewee
The Nation

The three male suspects were identified as a 26-year-old Frenchman, a 28-year-old Hungarian and a 33-year-old Italian.

Immigration police earlier this week inspected the fitness centre to check on the legal status of foreign employees there and found that, although the three men had proper documents for a temporary stay in Thailand, they were unable to present work permits.

They were apprehended to face the charge of working without permission. Sompong said the fitness centre, with Bt5 million in registered capital, could legally hire two foreigners, but the police inspection found it had allegedly hired above the quota.

Police were unable to find Chalomejit at the fitness centre, and so will contact the Makkasan Police Station to proceed in summoning her. They allege her actions as the business owner in allegedly hiring these foreign men without work permits violated the Alien Working Act 2008, which is punishable by a fine between Bt10,000 and Bt100,000 for each foreigner hired.