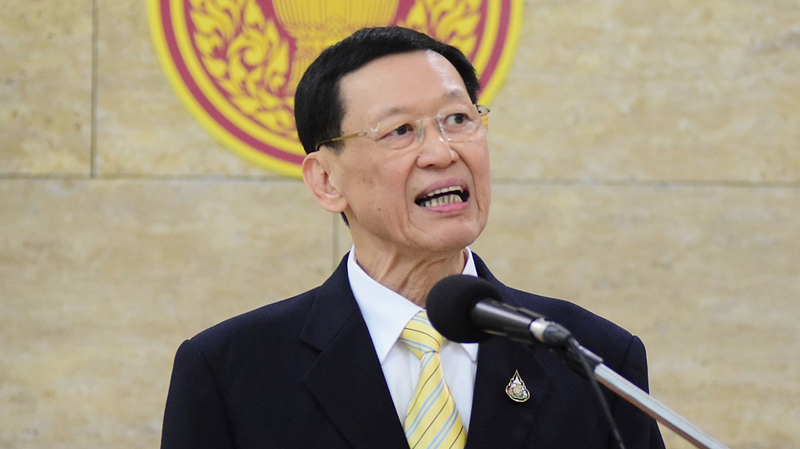 Paibul Nititawan, former leader of the People Reform Party, Thursday returned a subsidy fund his party had received from the Election Commission.

Paibul came to the EC Office to hand over a cashier check worth Bt882,909. He said the money came from the Political Parties Development Fund as political party subsidy.

He said People Reform had returned to the fund all the political subsidies it got, after the party’s executive board resolved to disband the party citing that party executives did not have the time to carry out political activities.

Paibul said that for his part, he would report its financial statement to the political party registrar within 30 days and the registrar would in turn send it in to the Office of the Auditor-General for verifying within 180 days.

Paibul said after informing the EC of the party’s decision to disband, he had become a former leader of People Reform but retained his MP status.

After the EC published the dissolution of his party, he will have to join a new party within 60 days and planned to join the ruling Phalang Pracharat Party, he added.

He said he had announced from the beginning that he would support Prime Minister General Prayut Chan-o-cha as the prime minister and so his decision to join Phalang Pracharat would not run against his election campaign policy.

The EC has reportedly decided to seek a ruling from the Constitutional Court as to whether a party-list MP could join a new party after his or her party is dissolved. Opponents of allowing the dissolution fear that the formula for calculating the number of party-list seats would be affected, tipping the balance of power in the legislature further toward the ruling coalition.

Paibul said he had so far not been informed that the EC, or any other person, would seek such a ruling from the Constitutional Court. He insisted that his party dissolution and his plan to join the Phalang Pracharat could be done in accordance with the Political Parties Act.