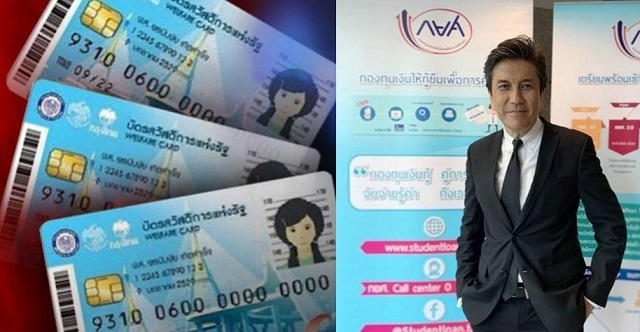 The Student Loan Fund (SLF) has issued five measures including a one-year debt suspension period for those who are holders of state welfare smart cards.

SLF manager Chainarong Kajchapanan said the board-approved measures included an 80 per cent cut in the overdue-repayment penalty for debtors wishing to repay the whole debt and close their accounts in one go between September 1, 2019, and February 29, 2020, and a reduction of 75 per cent in the overdue-repayment fine specifically for debtors who haven’t yet been sued and who will repay only the outstanding overdue amount so they can go back to “normal” status during the six-month period.

Another measure is a one-year debt suspension period for those who are holders of state welfare smart cards and have not yet been sued by the SLF, he said.

Those who usually repay on a yearly basis would be allowed the suspension for 2020 and would therefore have to resume repayment on July 5, 2021, while those who repay monthly would be allowed a suspension of 12 months after the SLF approves their applications to avail of the debt suspension, he explained.

Chainarong said SLF data suggested that about 335,000 debtors are eligible to apply for this debt suspension via www.studentloan.or.th/promotion during September 1, 2019 to February 29, 2020.

The other two measures are a reduction in the overdue-repayment penalty rate from the current 12-18 per cent per year to 7.5 per cent per year starting October 1 – so those who now repay their overdue debts to the SLF plus the penalty periodically as assigned could stick to their obligations better – and a Bt600 increment of monthly allowance for student borrowers, with high-schoolers each receiving Bt1,800 (from the previous Bt1,200) and college students getting Bt3,000 (from the previous Bt2,400), according to Chainarong.

This year the agency expects to get Bt30 billion in debt repayments thanks to the debtors’ better discipline and the previously implemented measure to automatically deduct instalments from debtors’ salaries.