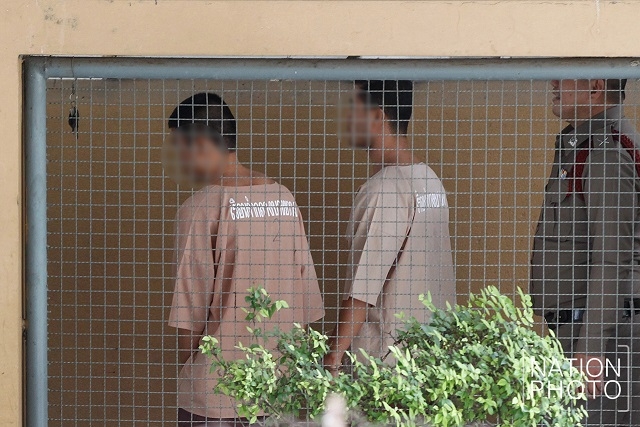 Nation/Korbphuk Phromrekha Myanmar migrant workers, Wai Phyo and Zaw Lin, sentenced to death for the 2014 double murders on Koh Tao, are escorted to Nonthaburi Court on August 29 to hear the verdict issued by the Supreme Court.

After the Supreme Court decided on August 29 to uphold the death sentences given previously to the two Myanmar men for the 2014 murder of two British tourists on Surat Thani’s Koh Tao, the defence team said they will seek a royal pardon for the pair in 60 days.

The defendants, both aged 22, were escorted from Bang Kwang Central Prison to Nonthaburi Court to hear the verdict, which was also translated by an interpreter via the E-Justice Conference Centre’s video conferencing system.

The verdict said this case has clear, credible and detailed evidence against the pair, including DNA matches, hence it is not convincing that the police will fabricate evidence to frame the pair as claimed.

Noting that the forensic evidence was carefully collected to prevent contamination and had been tested by a credible agency, and also that DNA tests were done on many Thais and foreigners in the vicinity, the court ruled that the defendants were not being targeted and found them guilty as charged.

The pair were escorted back to the Bang Kwang prison later.

The Rakhine migrant workers were arrested about a month after British tourists Hannah Witheridge, 23, and David Miller, 24, were found bludgeoned to death on September 15, 2014. Autopsy results also showed that Witheridge had been raped.

Although the suspects, facing charges of assault, murder, rape and theft as well as illegal entry into the country, reportedly confessed initially, they later retracted their confessions saying they had been tortured into doing so.

The pair was sentenced to death by the Koh Samui Provincial Court in December 2015, which resulted in protests outside the Royal Thai Embassy in Myanmar. Later, in March 2017, the Court of Appeals Region 8 also upheld the pair’s convictions. Their lawyer then appealed to the Supreme Court, alleging that the police had failed to carry out proper procedures in search for DNA evidence and had forced the pair to confess to the murders.