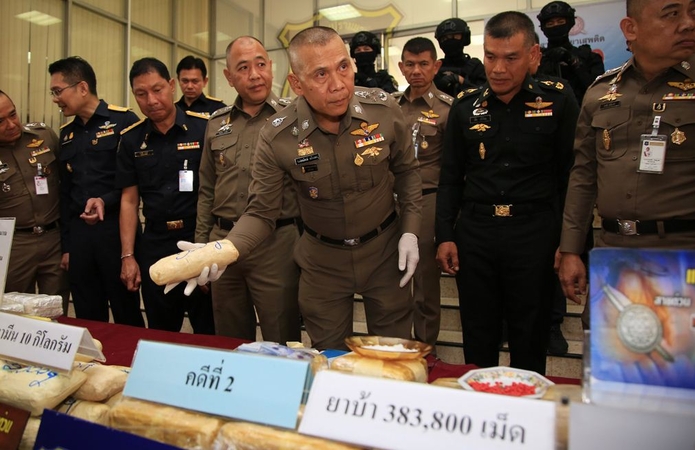 The Narcotics Suppression Bureau (NPB) police have arrested multiple drug suspects in many arrests, while seizing a large quantity of drugs totalling around Bt170 million in street value.

Two of the many suspects paraded at a press conference on Thursday were based in the southernmost provinces. Ibrohim Jehha and Arthit Sa-som were arrested with 383,800 amphetamine tablets allegedly in their possession.

Deputy police chief General Chalermkiat Seeworakhan said both men were assisted in their drug deals by the much-wanted Rofet Lambok on the run, who had his ill-gotten assets including three houses and three cars seized.

A total of nine suspects were flaunted at the NPB press conference. Police said they seized 1,413,800 amphetamine tablets, 20 kilos of ketamine and 5,000 ecstasy tablets, along with 1,210 tablets of cocaine.

The nine suspects included three foreign men, among them Kenyan Glenn Chivasello Ooko and Nigerian Osita Joseph Ukpa. Both men were caught allegedly trying to smuggle many bags of cocaine into Thailand, with Ooko allegedly found with condoms containing cocaine in his stomach.

The third foreign man was identified as Chinese national Changrui Cho, who police allege was found trying to smuggle ketamine out of Thailand.