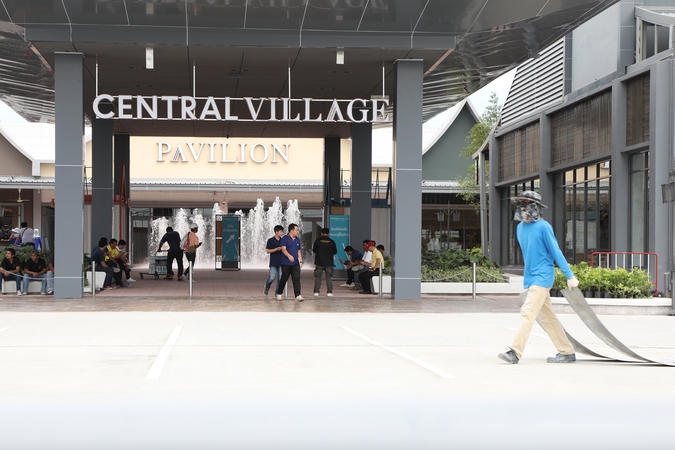 The Administrative Court issued an injunction at around 3pm on Friday (August 30) in favour of developer Central Pattana Plc (CPN), related to land connecting its new Central Village shopping mall to Highway No 370, which leads to Suvarnabhumi Airport.

According to CPN’s president and CEO Preecha Ekkunagul, Central Village is now under the court’s temporary protection, and Airports of Thailand (AOT) was ordered to remove their blockade of the luxury outlet’s entrance.

“CPN and [its] over 150 partner shops would like to thank the government, the Administrative Court, press and all related parties for helping us resolve the dispute by placing the country’s economic and tourism profits as top priorities,” said Preecha in announcing the injunction.

Earlier on Friday, Transport minister Saksayam Chidchob chaired in a meeting to resolve the conflict between AOT and Central Pattana Plc (CPN) over the connecting land, which he said was under the AOT’s administration.

The meeting took place at the Ministry of Transport and was joined by other related parties including the Civil Aviation Authority of Thailand (CAAT), Department of Airports (DOA), International Civil Aviation Organisation (ICAO), and Airline Operators Committee (AOC).

“Prime Minister General Prayut Chan-o-cha was concerned about the dispute and assigned me to take care of the reconciliation as soon as possible,” said Saksayam. “He advised me to use both legal and political principles to solve the problem, while thinking of the country’s benefits and aviation safety as top priorities.”

The meeting concluded later that evening with the ruling that Central Village is located on the land under Department of Airports' and Treasury Department's administration, therefore AOT has no jurisdiction on said land.

“Central Village will officially open tomorrow (August 31) from 10.39 to 22.00, while we offer a free shuttle service at Central World and BTS Udomsuk station,” said Preecha.