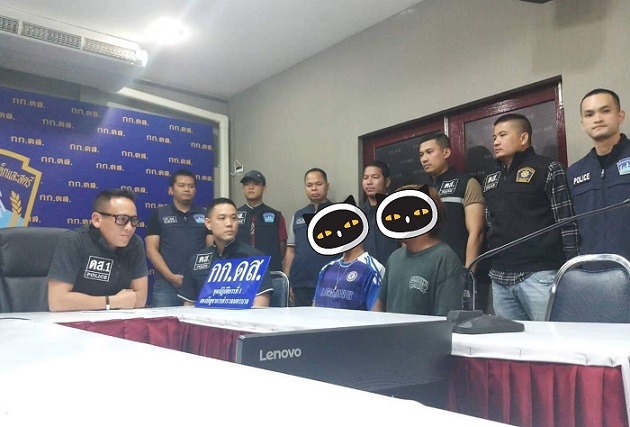 Police have arrested three men who allegedly posed as senior police officers who could clear away drug charges in a scam to dupe drug suspects of their money.

Arrest warrants were issued by Bangkok's Taling Chan Provincial Court on August 27 for Krit Rodboonkerd, 33, Surasak Kliang-owat, 31, and Jeerapan Jaikonkaew, 26. They were arrested on August 29 in Ubon Ratchathani’s Warin Chamrap district and reportedly told police they had committed similar fraud on 25 prior occasions and got away with Bt2.5 million.

The case stemmed from a separate drug bust that led to the arrest of a Thai male drug suspect identified only as “Nont”, along with 6,000 methamphetamine pills and 150 grams of crystal meth or "ice" in the Bangkok Yai Police Station jurisdiction early this month. A relative of Nont on August 16 then received a phone call from a man who claimed to be Pol Lt-Colonel Piyarat Vessakosol of the Children and Women Protection Sub-Division and boasted he could clear the drug charge for Nont in exchange for Bt100,000. Believing the story, the relative wired the money. After the case was not cleared away and the fraudulent caller was out of reach, the relative filed a complaint with police, resulting in a probe that first netted Jeerapan and Surasak who handled the money transaction for the gang, then Krit who made the call.

Sub-division head Pol Colonel Jirakrit Jarunapat issued a warning to the public to beware fraudsters who add a second blow to the relatives of drug suspects. “Relatives of suspects in criminal cases should be aware that no-one could help clear away charges, especially those drugs-related, so if they are contacted by anyone promising to be able to do that, you can assume that you are being duped,” Jirakrit said.

During a police interrogation, Krit reportedly confessed to having done similar fraud on 25 occasions in a three-month span and got away with Bt2.5 million, which he split among his gang members to spend on going out.

Krit had a prior arrest from 2011 for a similar fraud in which he claimed to be the then national police chief Pol General Priewpan Damapong. He was to sentenced to a year in prison for duping a crime suspect's relative of Bt200,000.

After being released, he tried to straighten out by raising chickens for sale, but when that failed to yield enough income he randomly called police stations to get information about drug suspects, which he used in the scam.

Police are now in the process of checking and seizing the suspects’ assets to repay the victims.