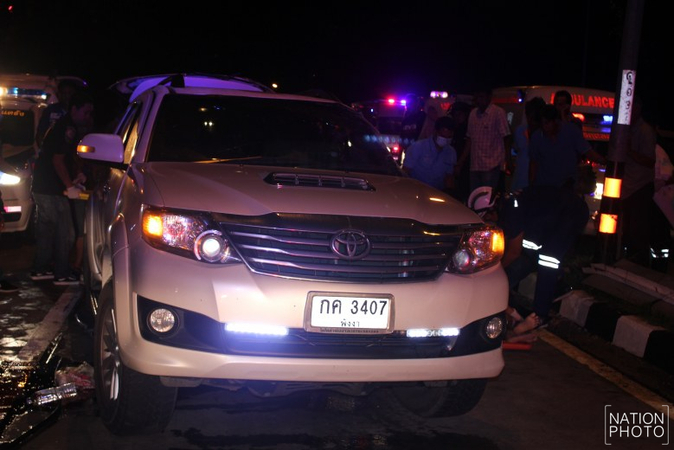 By Kanita Sitong
The Nation

A trailer truck hit a Toyota Fortuner SUV in Trang on Friday night (August 30), killing one and injuring six others. It is believed the accident was caused by two vehicles crossing an intersection at a flashing yellow traffic light and the driver of the SUV’s lack of unfamiliarity with the route.

Police officers and rescue teams from the Kusolsathan Foundation reported that the accident took place around 10.20pm at the Or Tor Kor-Bypass Intersection in Thapthiang subdistrict of Muang district.

When police arrived at the scene, they found a white Fortuner SUV with license plate Kor Khor 3407 Phang Nga, with its rear totally wrecked after being hit by a trailer truck driven by Prakot Thotham, 62, who remained at the scene to give a statement to the police.

Seven people were travelling in the SUV. One was thrown out of the vehicle on impact and died at the scene while the six others were trapped in the vehicle. Three were rushed to Trang hospital where they remain in critical condition. The deceased was later identified as Yurian Yumyuang, 50, a resident of Krabi’s Aaoluek district.

Abdullah Nayao, 58, a relative of the deceased who was following the SUV in another car, said the SUV was hit by the trailer truck as the driver crossed the intersection on a flashing yellow light. “The driver is not from around here and therefore unfamiliar with the route at night,” he added. “When I saw the accident I had to brake violently but the left side of my car still scraped the truck."