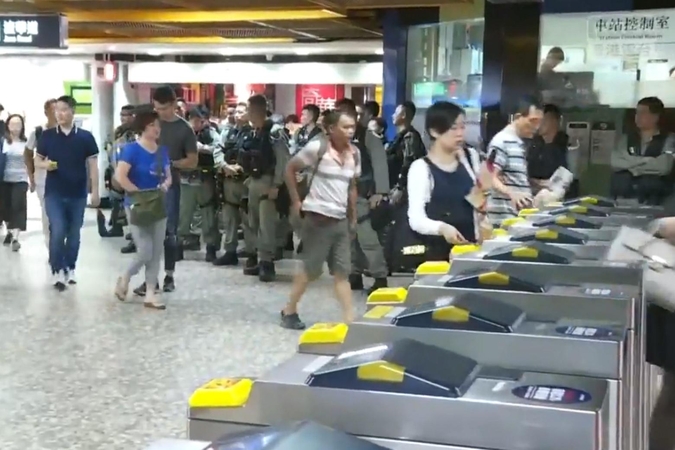 Riot police patrolling North Point MTR station ahead of the protest in Hong Kong on Sept 2, 2019. PHOTO: SCREENGRAB FROM RTHKVNEWS

HONG KONG - Anti-government protesters are gearing up for a day of possible violent showdown with the police, with Chief Executive Carrie Lam’s administration and the protesters stuck in a limbo as neither side is willing to strike a compromise.

Ahead of a planned two-day strike starting Monday (Sept 2), some groups of black-clad protesters with face masks have started a planned disruption of the city’s subway services on a rainy morning in what is the 13th straight week of escalated protests.

Adopting their mantra “be like water” to adapt to changes in circumstances, they gathered from 7.20am at various MTR stations including Kowloon Tong, Fortress Hill, Yau Ma Tei, Prince Edward and Mong Kok, with police officers on standby in various places to counter them.

To prevent trains from leaving the stations, protesters would sandwich tissue packets in between train doors or block commuters with umbrellas or their bodies.

As at 11am, several arrests have been reported by local news outlet HK01.

Railway operator MTR has been a target of protesters, particularly after it was granted a court injunction to shut stations on protest days. Chinese state media had previously publicly criticised MTR for helping protesters get away after clashes with the police.

On Monday, the railway operator said all stations will open even though 12 stations were damaged on Sunday and 32 on Saturday. Some protesters on Sunday had trashed Tung Chung station, ripping apart the station turnstiles and breaking ticket machines.

Get exclusive insights into Asia from our network of correspondents

Keep up with the latest in the region with the ST Asian Insider newsletter, delivered to your inbox every weekday

This, after they choked travel routes to the airport by setting up barricades at Sky City Interchange and Chek Lap Kok South Road. They used water-filled barriers, rubbish dumpsters and luggage trolleys, and hurled objects at officers and Airport Authority staff.

Police have warned that protesters could be in contempt of court given the indefinite court order banning actions that would obstruct the proper use of the airport and passageways nearby. The protesters’ action on Sunday led to 25 flight cancellations, said the Airport Authority.

Separately, students in high schools have marked their new school year by boycotting classes on Monday, the start of a new school term.

This coincides with the strike which starts Monday afternoon with an approved rally at Tamar Park in Admiralty, next to the now iconic Legislative Council that was stormed on July 1.

Hong Kong has been roiled by unrest when demonstrations escalated from June 9. What began in late March as opposition to a controversial extradition Bill proposed by Mrs Lam, has turned into a wider movement encompassing five demands.

They are: a complete withdrawal of the Bill instead of just an indefinite suspension; an inquiry into alleged use of excessive force by the police; removal of the “riot” label on the June 12 protest; the release of all protesters arrested and the implementation of universal suffrage.

The Bill would have Hong Kong extradite suspects to various jurisdictions, including mainland China.

But many doubt the Chinese legal system despite reassurances from the Hong Kong government that measures are in place to protect the rights of suspects to receive a fair trial.

Business sentiments are shaken and revenues have fallen, adding on to the city’s strains from the United States and China tussle, slowdown in China’s economy and weak Chinese yuan.

The months of protests have piled on the uncertainty and taken a toll on tourism and the pivotal retailing industry.

And the woes are far from over with Hong Kong on the brink of its first recession in a decade with Financial Secretary Paul Chan lowering its full-year 2019 growth forecast to 0-1 per cent, down from 2-3 per cent previously.