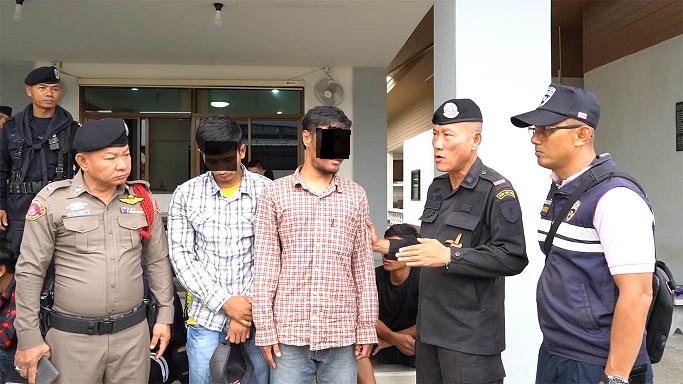 Paramilitary rangers rounded up 16 Cambodian workers while they were being led by two Cambodian agents in an attempt to cross the natural borderline into Cambodia from behind the Rong Klua Market and the Ban Khlong Leuk Train Station in Sa Kaew’s Aranyaprathet district on Monday.

The group drew the attention of a patrol team of rangers and related officials led by Captain Dechathat Chalermjit as they walked “suspiciously” on the railway.

The officers found that 15 migrants – nine males and six females – had no passports, while one, Som Khon, 40, able to present the document. Som said the group wanted to cross to Cambodia to collect new passports.

One of the two Cambodian agents, identified as Tek Khot, 30, told officers that he had charged each worker Bt500 for the service to cross the natural border.

The 15 migrants were initially charged for illegal entry to and depart from Thailand and then deported. Som was not deported and may face a charge of working without a permit after allegedly admitting to having previously worked at a factory in Chachoengsao’s Sanam Chai district.

Officers also passed Tek and his friend – who allegedly work in a gang that provided the illegal border crossing service – over to police to face charges of alleged illegal entry to and depart from Thailand as well as and illegally working in Thailand.