On a sunny morning in mid-August, hilltribe students of Ban Pana Sawan school in Chaing Rai’s Mae Fah Luang district dress in their ethnic costumes and perform a series of tribal activities and dances.

The playground of the school is transformed into a colourful stage as young Akha, Lahu and Lisu students have fun in their physical education and art and music classes.

“We’ve applied the ethnic identity of each of the hilltribes to our physical education and rhythmic activity classes to encourage our students to do more physical activity and improve their health in line with the Dek Doi Kin Dee scheme,” Sutin Pingsusaen, acting director of Ban Pana Sawan school, tells The Nation.

Physical activity was introduced to the students this year in a follow up to the earlier successful campaign to promote healthy eating habits under the Dek Doi Kin Dee project, which saw the school impose a ban on selling soft drinks and snacks on the premises.

As with all young people, resisting the sugary drinks and snacks is an effort but both Kanyanee Sae Mao, a 12-year-old Akha girl, and her pal Sasiwimon Lafuna,10, of the Lahu tribe, admit that the campaign has proved beneficial.

Though the girls still buy the odd snack or sugary drink, they consume far less than before and that’s saving them Bt5 to Bt10 of their pocket money every day.

“By reducing the snacks and doing more exercise, we can feel that our health has improved. We want the campaign to continue,” they say with smiles.

Other hilltribe students tell The Nation that they enjoy the PA classes as it allows them time to exercise and show off their tribal culture.

Sutin adds that both the PA and ban on snacks in school have been a great success and have helped the students to feel healthier. “They rarely get sick now and are confident about expressing themselves in front of public,” he says.

Medical checks are undertaken regularly and the improvements in health have been significant,” the acting director adds.

Here students are taught to plant organic vegetables and sell them to vendors, raise chickens for their eggs and learn to make fertiliser for the vegetable garden from chicken dung.

The activities are integrated with the curriculum and are marked in much the same way, a teacher explains.

The school has also selected a group of students to host a 15-minute radio programme that’s broadcast around the school before lunch every day to raise awareness about safe food and organic agriculture. 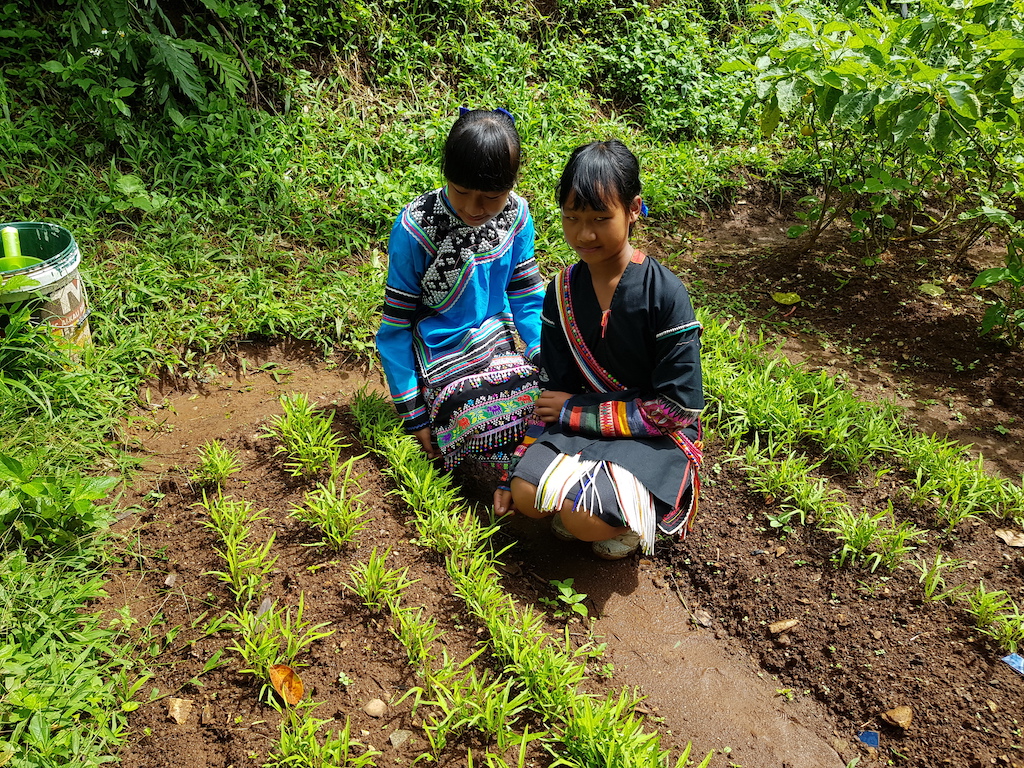 The programme was initiated by the Hill Area and Community Development Foundation (HACDF), a non-profit development organisation that works with hilltribe people in Northern Thailand. Launched in 2015, it has so far been implemented in 33 schools in the four districts.

The program, which came to an end last month, was funded by the Thai Health Promotion Foundation (ThaiHealth) and divided into four year-long phases.

For the first three years, the project promoted healthy eating habits among students but this year, the focus was on making the students move more and frequently change position to counter the sedentary lifestyle that plagues all schoolchildren face by providing them with physical activity relevant to their lifestyles, Juthamas explains.

Hilltribe students usually study from 8am to 8pm, going from their lessons to Chinese classes after school. That means there is little time for exercise.

The idea is to integrate hill tribe sports or dancing as part of their daily classes so that they are on their feet and moving every 15 minutes.

“Over the four years, the project has built greater understanding among communities, schools and children. Most importantly, the students have more physical activities that are related to their lifestyles and beliefs,” Juthamas explains, adding that she is hoping for sufficient additional funding to cover another two years of implementation. This, she explains, would allow the project to show the kind of success that would turn it into a national policy under the future educational system.