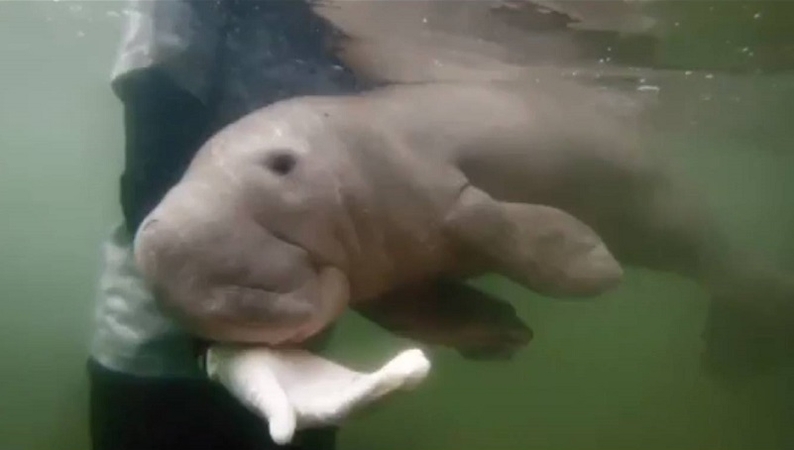 Trang’s ambitious plan to turn Koh Libong into an Asean model for the conservation of dugong, sea grass, coral, marine life, coastal resources and traditional lifestyles has garnered unanimous support, including from the Department of Marine and Coastal Resources, the Andaman Foundation, community leaders and traditional fishermen’s representatives.

Trang Governor Luechai Charoensap, who presided over a meeting on the project on Tuesday, said he agreed with the scheme, which went hand-in-hand with the provincial development plan to systematically care for dugong, sea grass and rare marine life.

He said the project must put community people on the same page of understanding and related laws should be carefully studied, while a management plan, which included community participation, must also be clearly formulated.

After details of this mega project are completed and receive Cabinet approval, it would be presented to the World Dugong Conference in Trang next year, he added.

Representatives of the Koh Libong wildlife sanctuary, which proposed the plan, and those from King Mongkut’s University of Technology North Bangkok and Rajamangala University of Technology Srivijaya Trang Campus, in their capacity as the project’s advisers, told the meeting that the sanctuary’s 200-rai (32 hectare) land plot at Thung Chin Bay would be turned into an “Asean sea world” comprising facilities such as an ecotourism learning centre/museum, a hospital for rare marine life, and a comprehensive marine-life nursery.

The project aims to make Koh Libong a model for Asean countries in tackling threats to not only dugong and rare marine life but also to coastal resources. This comes amid Trang’s nearly 200 dugong population being in critical danger, with this year already seeing 10 of them being swept ashore and died.

The plan also calls for in-house veterinarians and modern equipment to take care of sick or injured dugong and rare marine life such as turtles and dolphins, as well as cooperation with foreign experts from cities that have dugong populations, such as Moreton Island in Brisbane, Australia, and Orlando and Sarasota in the US state of Florida.

Koh Libong, Trang’s largest island with impressive biodiversity, has the country’s largest population of 180 dugongs and 18,000 rai of sea grass. The 400,000-rai Koh Libong wildlife sanctuary and adjacent Hat Chao Mai National Park have been declared one of the 14 Ramsar sites in Thailand and will be proposed next year as an Asean heritage site.