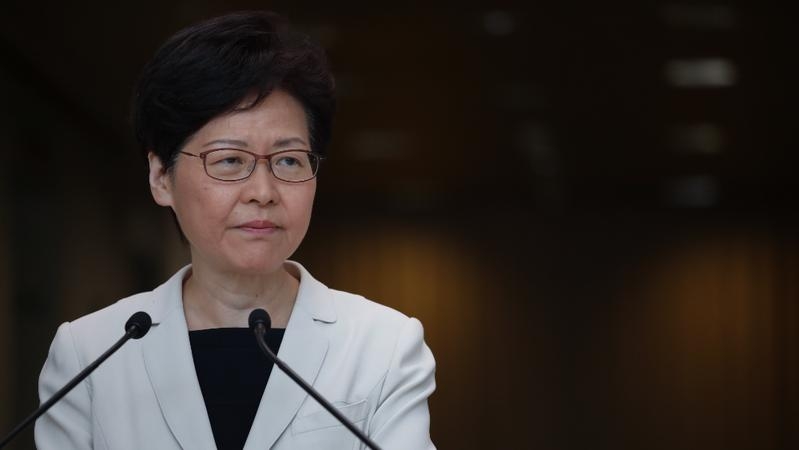 In an audio recording of a closed-door meeting last week between Hong Kong's chief executive Carrie Lam and local business people that was leaked to Reuters,  Lam is heard to say that she longed to resign.

HONG KONG -Beleaguered after three months of increasingly violent street protests, Hong Kong's chief executive Carrie Lam said on Tuesday (Sept 3) morning that her emotions were in turmoil but that she had not tendered her resignation and had no intention of stepping down.

Senior Hong Kong officials and Beijing advisers have been saying for weeks that Mrs Lam is deeply unhappy in the job, but that Beijing's leaders will not allow her to resign even if she decides that she wants to do so.

"She is very frustrated, very downhearted, at times even emotional, but she is also a very resolute person - she feels she has a job to do, she has a job entrusted to her by Beijing, and she intends to do it," Ronny Tong, a member of  Lam's Executive Council, or Cabinet, said in an interview in late August.

Lau Siu-kai, vice chairman of the Chinese Association of Hong Kong and Macau Studies, a semiofficial advisory body set up by Beijing, said: "After things settle down, there may be a reshuffle of the leadership team. But to do it now is seen by Beijing as a sign of weakness that would cause more riots to occur."

After a summer of protests that began with huge marches and has evolved into battles in the streets and subway stations between masked protesters and the police, Lam has remained a very personal target for demonstrators. They assail her for having introduced a bill earlier this year that would have allowed Hong Kong residents to be extradited to the opaque and often harsh judicial system of mainland China.

One of five demands by protesters has been that Lam must resign and that a successor be elected through universal suffrage.

In an audio recording of a closed-door meeting last week between Mrs Lam and local business people that was leaked to Reuters, Lam is heard to say that she longed to resign.

But one key obstacle to her doing so is that she lacks an heir apparent to run this fractious, semiautonomous territory of China. Beijing also remains opposed to allowing any general election in which pro-democracy candidates could run.

Before becoming chief executive two years ago,  Lam was a lifetime civil servant in Hong Kong, rising to the second-highest job in the territory, which is chief secretary.

That means the pro-Beijing faction, which tends to take a much more hard-line stance against democracy protesters, is due to supply the next chief executive.

But numerous people involved in succession discussions over the past month said that the choice is far from simple.

All of Hong Kong's four chief executives so far, including  Lam, have run into serious political difficulty. That makes it harder to predict whom Beijing might choose next.

Beijing has discouraged the Hong Kong government from accepting outright any of the five broader demands being made by the protesters, although the government has taken small steps toward partially meeting a few of them, Beijing advisers said.

"Things have gone beyond the so-called jurisdiction of the Hong Kong government - even though the whole thing was triggered by Carrie Lam - to become something that must be handled by Beijing,"  Lau said.

In Beijing, officials from China's Hong Kong and Macau Affairs Office again expressed support for Lam and her government and said that the central government believed that local authorities still had "the will and capability to end the violence and restore order".

At the same time, Xu Luying, a spokeswoman for the office, noted that the Standing Committee of the National People's Congress had the authority to declare a state of emergency that would allow the central government to intervene, if the situation deteriorated. "The central government will never sit idly by," she said.

On the political front, Beijing's favourite choice and heir apparent until early summer was the city's financial secretary and third-ranking official, Paul Chan, said people familiar with the selection process. These people insisted on anonymity because of political sensitivities about discussing the subject before Beijing makes a decision.

Chan is a longtime accountant and the protégé of Mr Leung Chun Ying, the fiercely pro-Beijing real estate surveyor who was Mrs Lam's predecessor as chief executive of Hong Kong.

Chan declined repeated requests this summer for an interview.

Another option for Beijing, if it wants a business leader, would seem to be Bernard Chan, the convener of Mrs Lam's Executive Council. But Mr Bernard Chan, the president of a Hong Kong insurance company, insists he has no desire to become chief executive.

"I have a business to run," he said in a telephone interview. "I'm not willing to give up my business."

If China's leader, Xi Jinping, does not continue the alternation of business leaders and civil servants in Hong Kong's top government post, he has at least a half-dozen current and former civil servants among whom to choose.

Two of the former chief executives have been former chief secretaries: Mrs Lam and Donald Tsang. But the current chief secretary, Matthew Cheung, an avuncular 68-year-old who is approaching retirement, has not publicly evinced any interest in moving up.

Cheung declined to be interviewed. His office emailed a short statement when asked this summer about his political future: "We do not reply to speculative questions," it said, adding that Cheung "is fully and wholeheartedly committed, as ever, to serving the people of Hong Kong and propelling vibrant Hong Kong forward."

If  Lam were allowed by Beijing to step down, Mr Cheung would become the caretaker chief executive. If she stepped down with more than six months remaining in her term, which runs through the end of June 2022, then a successor would be chosen to serve the remainder of her term.

The same nearly 1,200 people who chose Mrs Lam in 2017 would gather and vote on a candidate, and the winner would be appointed by Xi to run Hong Kong. The 1,200-member commission is dominated by pro-Beijing politicians.

Emily Lau, a former chairman of Hong Kong's Democratic Party, said that democracy advocates hoped Beijing might choose Edward Yau, who is Hong Kong's secretary of commerce and economic development and previously served as secretary of the environment. Asked whether he might want the job, Yau responded with an emphatic "No!"

He explained that he loved the civil service and saw himself as an administrator.

Several other former Hong Kong government officials have had high approval ratings over the years in polls by Hong Kong University, including Henry Tang, a former chief secretary, and John Tsang, a former financial secretary. Another possibility would be Norman Chan, who is retiring this autumn after a decade as chief executive of Hong Kong's central bank.

But these former government officials may not have enough connections in Beijing to be chosen. Mr Tang, who is mentioned the most often among them as a possible successor, and who unsuccessfully sought to become chief executive in 2012, said through a spokesman that he supported Mrs Lam and had no intention of seeking the post again.

That leaves Regina Ip. She leads a pro-Beijing party, the New People's Party, that is popular with staunch advocates of law and order.

Ip is one of the very few pro-Beijing politicians who has been able to win a seat in the legislature in general elections, instead of being named by an industry or other special interest group. She is also a former senior civil servant with broad experience.

But as secretary for security in 2003, Ms Ip helped lead an unsuccessful effort to pass stringent legislation that would have allowed warrantless police searches during security emergencies and would have authorised the shuttering of news organisations deemed seditious.

In a recent interview, Ms Ip said that Hong Kong needs social and economic reforms. But she contended that rapid progress on universal suffrage is not possible under Hong Kong's mini-constitution - a position that democracy activists strongly dispute. She declined to discuss her political ambitions.

Bonnie Leung, the vice convener of the Civil Human Rights Front, said that if Beijing selects  Ip, that might help democracy activists gather even larger crowds out of worry that she would introduce further security legislation.

But Leung said that Ms Ip's legislative experience might also make her more responsive to public sentiment than any of the alternatives.

"After what happened in 2003, I believe she learned a lesson," Ms Leung said. "She would react more sensibly to people's voices."

Lacking a clear successor makes it even harder for  Lam to step down.

"I have not even contemplated to discuss a resignation with the Central People's Government," Mrs Lam said on Tuesday, referring to China's national government in Beijing. "The choice of not resigning is my own choice."