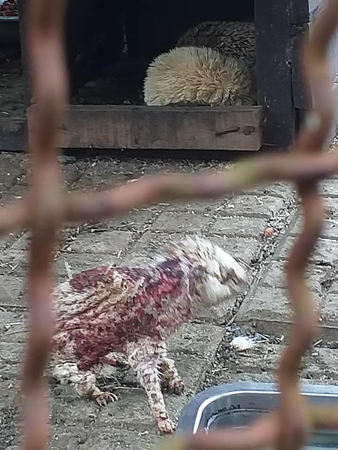 A visitor to a zoo in Nakhon Si Thammarat posted a video clip and photos of an elderly and obviously sick hedgehog inside a cage, prompting an organization to take it to an animal hospital for treatment on Tuesday.

Rattanaporn Jaiaree posed the photos on her Facebook page on Tuesday, writing that she had spotted the sick animal while visiting the Somdej Phra Srinakharin 84 Thung Thalad Zoo in Tambon Na Khian in Muang district.

She wrote that she was not familiar with the animal but felt sorry for it as it had no strength to walk to its water bowl and was obviously suffering from a severe skin disease.

Her post received over 500 comments and was shared over 2,400 times.

The post caught the attention of the SOS Animal Thailand the same day and it dispatched an official to take the animal from the zoo to be treated at an animal hospital. The organization also indicated it would shoulder the cost.

Jerm Kamlangkua, 61, an employee at the zoo, said the Thung Thalad Zoo’s license has expired and the municipality has not extended it so the zoo was simply taking care of the remaining animals in their last days without acquiring new ones.

Jerm said the sick hedgehog is about six or seven years old and that hedgehogs have an average life span of four to eight years. He confirmed that the hedgehog was suffering from a skin disease and its quills had been shedding for several days. Jerm said a veterinarian had been visiting and treating the hedgehog in the cage, which it shares with six other hedgehogs.

Following the post, the zoo decided to separate the sick hedgehog and it will be returned to the cage after it recovers, Jerm said.