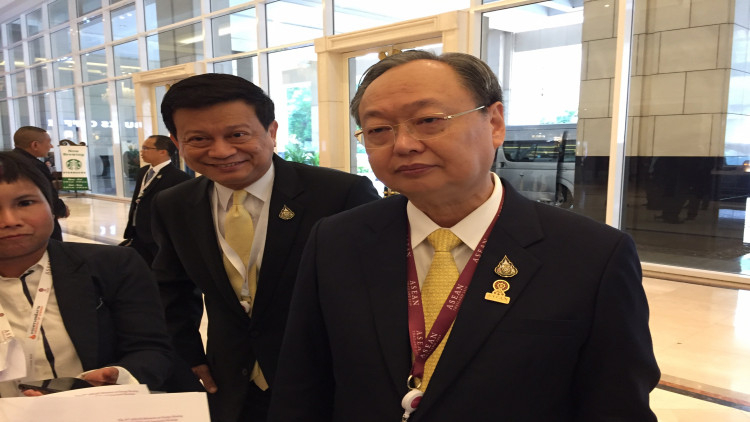 Energy Minister Sontirat Sontijirawong says he will speak with his Cambodian counterpart regarding the dispute over the maritime border with the aim of joint development of the overlapping claim to benefit both countries on Thursday (September 5).

The 37th Asean Ministers on Energy Meeting and Associated Meetings (AMEM) will be held from September 2 to September 6.

The main topic of the session is Cambodia’s need for energy to fuel future economic growth. Thailand generates a surplus of energy beyond the needs of its population. Both countries will discuss how to generate and trade energy for Cambodia. Thailand is ready to invest in a power plant if Cambodia followed a plan to build more plants in the country, said the minister.

“In this session, we will talk about future collaboration on energy between the two countries, not a final verdict. Energy collaboration is only part of the solution to a problem that has been around for 20-30 years.” Sontirat said.

Cambodia was reportedly interested in buying electricity from Thailand and in a joint investment in coal-fired power plants on Kong island, near the border with Thailand.

Moreover, Asean countries aim to increase alternative energy generation to 23 per cent within six years, with Thailand aiming for 30 per cent. Thailand hopes to be the regional leader in generating alternative power, especially that coming from use plant sources.

In a related matter, Sontirat added that Thailand, Laos and Malaysia had agreed to expand their volume of electricity trading to 300 megawatts from the current 100MW and the signing ceremony will take place at the end of the year. Trading will begin next year until 2021.

He added that Singapore is also keen to join the trading.

Prime Minister Prayut Chan-o-cha, who  presided over the AMEM meeting, said Asean counties have been facing an energy challenge as their economies grow every year.

“We are living in a world that will transit into a new era of clean energy. Asean counties need more energy to [fuel] our societies and economies, which are growing rapidly,” said General Prayut. “Clean energy and alternative energy might become the major power sources in the near future, so we have to develop the energy market and invest more in both fossil fuels and non-fossil fuels for Asean region’s energy security.”